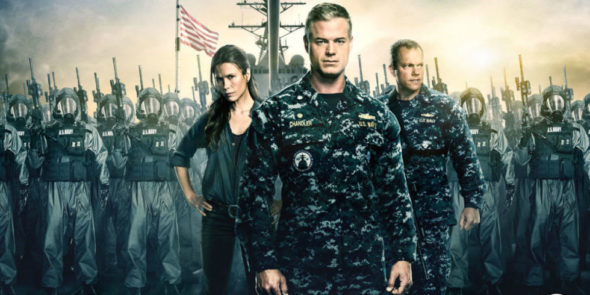 To no surprise, TNT has renewed their action drama, The Last Ship, for a fourth season. There will be 13 episodes once again. Season three is currently airing on Sunday nights.

Based on William Brinkley’s popular novel, The Last Ship chronicles a global catastrophe that nearly decimates the world’s population. Because of its positioning, the Navy destroyer U.S.S. Nathan James avoided falling victim to the devastating tragedy. But now, CO Captain Tom Chandler (Dane) and his crew must confront the reality of their new existence in a world where they may be among the few remaining survivors.

In its third season, The Last Ship is reaching an average of 7.6 million viewers per episode across all platforms. New episodes premiere Sundays at 9 p.m. (ET/PT) on TNT. Fans can catch up on episodes from the first half of season three through TNT On Demand and the TNT website and mobile app. Past seasons are currently available on Blu-Ray and DVD, as well as on Hulu.

What do you think? Do you like The Last Ship TV show on TNT? How long do you think this series should run?

This is an awesome show and should continue. I watch every episode. It really is my favorite.

It’s my favorite show! I want it to go on and on.

I think this show can succeed if it makes some dramatic changes in its mission and stays afloat, pardon the pun. Mission changes can include adding a few new characters (really like the current characters) and going on the offensive against those that would capitalize on the epidemic. Try to stay away from the politics at the top level. Stay navy and leave the country management to the politicians. Here’s a new wrinkle: add a couple or three ships to the armada so that fuel, armament, food and general supplies are better available. Ships in the armada might include a… Read more »

This is an excellent show! Love it. Happy that it will be returning this summer.
Please keep it going.

This is one of the best TV series I have ever watched I thoroughly enjoyed every episode . The suspense and drama kept me wanting more and more. I am so glad that there will be a fourth season.

Love this show. PLEASE Keep it going. Wish there were more shows like it.

May we know if there will be season 4 for the Last Ship. Its a great TV series movie.

Hope it will be still be renewed…

Superb …………..Agree with others, please dont take this off air and replace it with rubbish…..

Absolutely love last ship. Dont take a good show off and replace it with crap.

At least a few more years. It’s a real winner! Chandler for Commander In Chief over Hillary any day!!

This is definitely my favorite how currently on television.