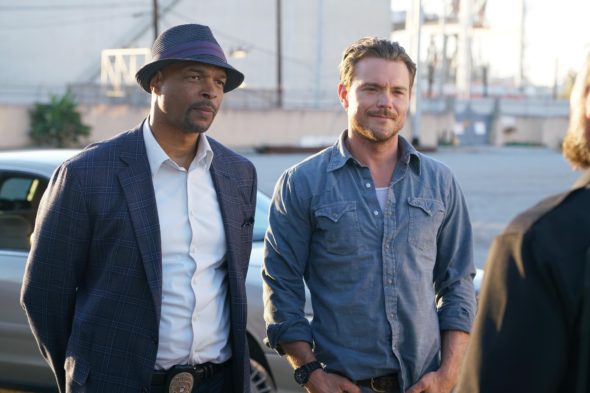 Lethal Weapon just aired its season one finale last night, but what about season two? Recently, creator Matt Miller spoke with TVInsider about the future of the FOX TV series.

Based on the film franchise, the police drama centers on two very different cops who are forced to work together on the streets of Los Angeles. The cast includes Damon Wayans, Clayne Crawford, Kevin Rahm, Keesha Sharp, Dante Brown, Chandler Kinney, Jordana Brewster, and Johnathan Fernandez.

In the interview, Miller said he plans on bringing guest stars Hilarie Burton and Thomas Lennon back for season two:

I love Hilarie and I would love for her to come back in Season 2. She and I have spoken about it and she’s totally game. It’s literally a logistical question, because she has a kid and they live in upstate New York and her husband (Jeffrey Dean Morgan) is on The Walking Dead. I have to write the story to accommodate her calendar, which I’m more tan willing to do so I’m very hopeful she’ll come back in Season 2.

I’ve spoken to Thomas about it and I would love, love, love for him to come back. I think he was amazing! So our plan is certainly to bring him back.”

Later, he revealed season two will offer a kind of fresh start:

I don’t want to give away too much but the idea is to make it a satisfying entry into Season 2 so we don’t feel like we’ve short shrifted the audience. A season premiere is almost like a reboot of a show so that’s what we’re going to intend to do with our first episode.”

FOX has already renewed Lethal Weapon for a second season.

What do you think? Did you watch season one of Lethal Weapon? What do you hope happens in season two?

Just finished watching season one and we are hooked, one of the best series that has been on for years, the story, actors, are pure genious, can’t wait for season 2 to start.

This is my husband and my favorite show to watch! So glad is is renewed.

My husband and I love this show. Thanks for renewing it.

Yes, to season two! I love this show!

I am thrilled there will be a Season 2! I love this show. Best TV show that’s been aired in years. I love Murtagh & Riggs. You couldn’t have found 2 better actors. Thank you Fox!!

Loved it. The more I watched, the more interesting it was. Please bring it back next season.

My daughter wants them to blow up the toilet like in the movie. That would be sooo cool!

I LOVE THE SHOW!!!!! I really hope it turns for season two. Very well written. Excellent acting. Just as funny and played like the original movies. Way to go team!!!

These two gentlemen are absolutely AWESOME! They both play their characters to perfection! We look forward to Wednesday nights because of this show & the people in it. Very happy to hear it will continue with a 2nd season! The action, the family scenes & the Yes! ? No! ? romance for Riggs keeps us wondering. (Big Yes!) You’re doing a job! Keep up the good work!! ❤❤Love Riggs and Murtaugh!!