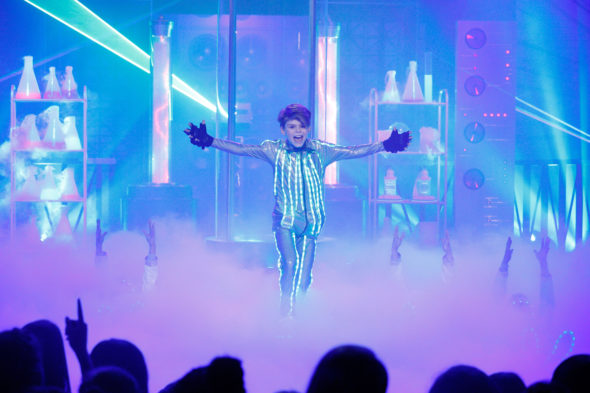 A spin-off of Paramount’s Lip Sync Battle, the series “features real kids lip-syncing pop songs in celebration of their favorite artists, while competing for the iced-out Shorties mic.” Nick Cannon will return as host for season two.

NEW YORK — Nickelodeon today announced it has renewed its hit competition series Lip Sync Battle Shorties for a second season with 10 half-hour episodes. The ultimate music showdown, which to-date ranks as the number one show with kids 6-11 in its Friday night timeslot, features real kids lip-syncing pop songs in celebration of their favorite artists, while competing for the iced-out Shorties mic. Multi-faceted entertainer Nick Cannon returns as host, along with show sidekick JoJo Siwa. Production will begin in Los Angeles this summer.

In Lip Sync Battle Shorties, three amped up battlers hit the stage, as they lip-sync songs from some of the most popular names in music including: Kelly Clarkson, Bruno Mars, Beyoncé, Lady Gaga, Imagine Dragons and more. Each performance comes straight from the participants’ imagination, allowing them to personalize all creative elements from song and costume selection to epic dance moves and eccentric themes. Also featured in every episode is the Shorties Dance Crew, a 10-person, in-house backup crew who has mastered all styles of dance from breakdancing to ballroom and a special celebrity guest.

“We’re thrilled to be coming back for a second season of Lip Sync Battle Shorties on Nickelodeon! It’s an incredibly positive engaging platform for kids to be their most creative, imaginative, authentic selves,” said executive producers Casey Patterson and Jay Peterson.

What do you think? Have you seen Lip Sync Battle Shorties? Will you watch season two?