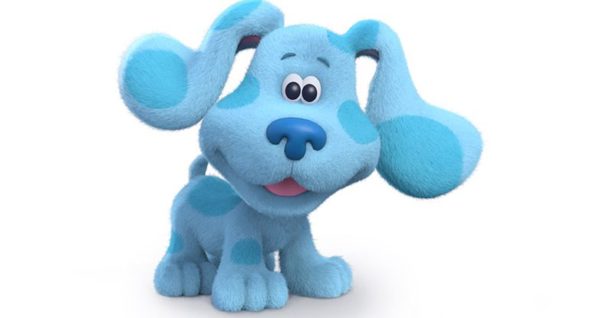 Sit down in your thinking chair for this one. Nickelodeon is reviving its Blue’s Clues TV show for a new generation. Whose clues? Blue’s Clues. The initial order is for 20 episodes, with updated animation.

A live-action/animation hybrid, the original Blue’s Clues premiered on Nickelodeon in September of 1996, with host Steve Burns as Steve. Burns left the educational children’s television series in 2002 and was replaced by Donovan Patton who played Joe, until the show was cancelled in 2006. (This writer’s youngest son, who was a toddler when Burns left, couldn’t stop crying about ‘Teve’.) Nickelodeon will begin casting the reboot, next month.

Nickelodeon’s “Blue’s Clues” is Back, Remade for a New Generation of Preschoolers

NEW YORK — Nickelodeon will have a new generation of preschoolers searching for clues, as it brings back the beloved puppy Blue in a remake of its groundbreaking series, Blue’s Clues. Picked up for 20 episodes, the new Blue’s Clues will have a refreshed signature look and casting for the new host will begin this month, including an open call in Southern California on April 14. For more info, visit http://blues-clues-host-casting.nick.com. Production on Blue’s Clues will commence this summer.

“With Blue’s Clues, Nickelodeon launched what became TV’s first generation of interactivity for preschoolers and set the bar for quality, curriculum-driven shows we have made since,” said Cyma Zarghami, President, Nickelodeon Group. “The new, modern version of Blue’s Clues will capture all the original’s creativity and visual identity for a whole new audience ready for its fun adventures and expertly designed problem-solving curriculum.”

The new Blue’s Clues series centers on the energetic girl puppy Blue who invites viewers into her animated world to help solve the day’s puzzles with the help of a live-action host. Preschoolers are encouraged to interact with the action on-screen by answering questions, pointing out clues, jumping on their feet and playing along.

The original Blue’s Clues series launched in September 1996 to critical praise from educators, parents and preschoolers and ran for six groundbreaking seasons. Created by Traci Paige Johnson, Todd Kessler and Angela C. Santomero, Blue’s Clues drew acclaim and high ratings for its unique interactivity that helped change the way kids watch television and has remained one of the most popular preschool shows of all time. The landmark series also raised the bar in preschool television by exploring advanced subject matter such as sign language, geography, physics, emotions and anatomy.

The classic Blue’s Clues library is currently available on NOGGIN, Nickelodeon’s video subscription service for preschoolers, and short-form content can be found on the Nick Jr. App and NickJr.com.

[Press release from The Futon Critic]

What do you think? Do you remember the original Blue’s Clues TV show? Will you check out the reboot of this children’s TV series? Let us know, below.