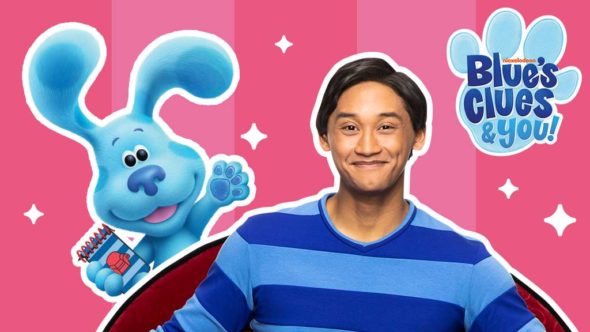 Get ready for even more of Blue on Nickelodeon. Blue’s Clues & You has been renewed for a second season after only one week on the air. This new series, which is inspired by the original Blue’s Clues, jumped into the #1 spot after its first week.

Nickelodeon revealed more about the renewal in a press release. Check that out below.

The second season of Blue’s Clues & You! will follow Josh (Josh Dela Cruz) and puppy Blue on brand-new adventures with friends old and new. The new season will also feature special appearances by Steve (Steve Burns), Joe (Donovan Patton), and Josh’s Lola (Carolyn Fe)–his grandmother–along with even more singing and dancing, exploration, celebration, and of course clues that empower preschoolers to help their friends.

Later this month, Nickelodeon will debut a brand-new float inspired by Blue’s Clues & You! in the 93rd Annual Macy’s Thanksgiving Day Parade(R). Host Josh Dela Cruz will perform on the float alongside a 22-foot tall Blue covered in 13 pounds of glitter.

Alongside the linear episodes, brand-new Blue’s Clues & You! play-along videos are currently available in Noggin, Nick’s top-ranked interactive learning subscription for preschoolers. The play-along videos allow users to explore the stories in an immersive way, and engage with live-action host Josh and the animated characters, by tapping, touching or swiping to navigate through enhanced learning experiences. Preschoolers have the ability to customize elements, like the color of the clues or the creation of birthday cards for Blue, and then see their designs appear throughout the video. The classic Blue’s Clues library is also available on Noggin and additional Blue’s Clues & You! play-along videos will continue to roll out into next year.

Original short-form content and full-length episodes of Blue’s Clues & You! are available now on NickJr.com and the Nick Jr. App. Episodes are also available on Nick Jr. On Demand and Download-To-Own services.

Blue’s Clues & You! follows Blue as she invites viewers to join her and Josh on a clue-led adventure and solve a puzzle in each episode. With each signature paw print, Blue identifies clues in her animated world that propel the story and inspire the audience to interact with the characters.

The original Blue’s Clues series launched in September 1996 to critical praise from educators, parents, and preschoolers and ran for six groundbreaking seasons. Created by Traci Paige Johnson, Todd Kessler, and Angela C. Santomero, Blue’s Clues drew acclaim and high ratings for its unique interactivity that helped change the way kids watch television and has remained one of the most popular preschool shows of all time. The landmark series also raised the bar in preschool television by exploring advanced subject matter such as sign language, geography, physics, emotions, and anatomy.

Nickelodeon, now in its 40th year, is the number-one entertainment brand for kids. It has built a diverse, global business by putting kids first in everything it does. The brand includes television programming and production in the United States and around the world, plus consumer products, digital, location based experiences, publishing and feature films. Nickelodeon and all related titles, characters and logos are trademarks of Viacom Inc.”

What do you think? Were you a fan of the original Blue’s Clues? Have you watched the new series, Blue’s Clues & You with your family?

I remember watching Blue’s clues with my kids. My grandkids love absolutely love the new show blues clues and you even more. The new JOSH is awesome. I am hoping season 1 of the new Blue’s Clues and you comes out soon on dvd. Need it for our long drives. Nice remake. Better than the original.

My children watched the original Blues Clue and now my grand children 3, 3 and 14 months can’t wait for it to come on everyday! Watch repeats over and over again. Looking for Blues birthday coming on Feb 7th! So happy for the return!

My kids both loved Blues Clues. I used to tape them for my now Junior boy. He had a Blues Clues blanket that went to my younger son that is now in 7th grade. We still have the blanket.

Love love love.. my kids watch it all day.. we have always been huge fans of blues clues all of them.. and so excited for new fun episodes.. please keep it coming

I was a big fan of the original series and even though I haven’t seen much but a teaser trailer video on Facebook. I love that they brought back the series for a new audience and I hope they have many more years!!