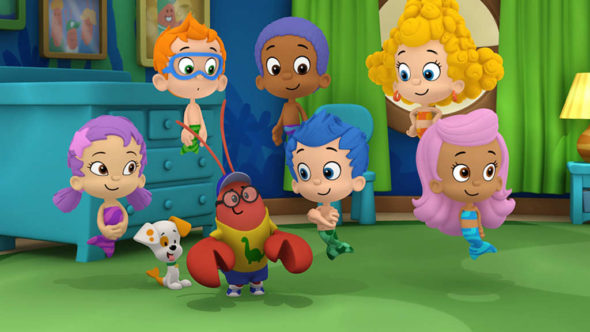 The animated children’s series “is set in a vibrant underwater environment and follows a group of diverse preschoolers with colorful fish tails who go on adventures discovering their world.”

NEW YORK-Sept. 17, 2019-Nickelodeon’s hit preschool series Bubble Guppies will make a splash with the debut of an all-new season and a brand-new guppy on Friday, Sept. 27, at 12 p.m. (ET/PT). Season five of Bubble Guppies (26 half-hour episodes) will introduce Zooli, a spunky and smart student, animal expert and fin-tastic friend to the guppies’ school class. Together, the guppies will dance, sing, play and learn valuable lessons as they embark on all-new underwater adventures.

Nickelodeon’s Emmy Award-winning Bubble Guppies is created and executive-produced by Jonny Belt and Robert Scull and co-developed by Janice Burgess. The interactive CG-animated series is set in a vibrant underwater environment and follows a group of diverse preschoolers with colorful fish tails who go on adventures discovering their world. Bubble Guppies is set to a soundtrack of catchy, educational pop songs and features a curriculum that infuses the core elements of kindergarten readiness, including math, literacy, the arts, science and socio-emotional development.”

What do you think? Do your kids watch Bubble Guppies? Are you glad it’s coming back?

My great grandson loves bubble guppies. He just turned three. He has learned a lot. He knows there are germs and hand washing is important. He understands tidying up. He has been watching Bubble Guppies since he started walking. I have taken care of him since he was born. Your program has taught him a great deal. Thank you for creating such a wonderful animated film.

Yes the whole family is so excited for a brand new season of Bubble Guppies!!! We were so bummed it was to be cancelled at one time. Please keep making new seasons for a very loyal family of watchers!!!