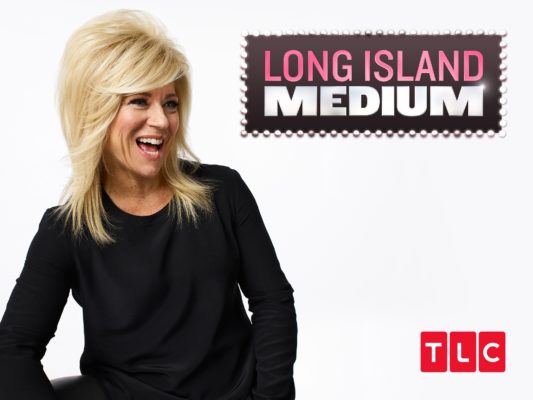 The Long Island Medium is back in action! Today, TLC announced the TV show will return for its 13th season in October.

LONG ISLAND MEDIUM will return with brand new episodes on a new night and time, Monday, October 8th at 8:00PM ET/PT. Through her gift of healing and connecting people with loved ones who have departed, Theresa hopes she can bring closure and a sense of peace to each person she reads.

Life at home is a little different for Theresa this year. She has separated from her husband Larry and has had major knee surgery. And, if that weren’t enough, she is now adjusting to living on her own while her house is under construction. In addition to her personal struggles, these new episodes will also include many fun and emotional moments including meeting her daughter’s boyfriend, a surprise reading at a bachelorette party and a “knock and shock” surprise hour.

LONG ISLAND MEDIUM is produced by Magilla Entertainment for TLC.”

What do you think? Do you watch Long Island Medium? Are you looking forward to the new season?

This season will mark a new chapter for the Caputo family. My heart goes out to all of them for the loss only they know. I hope for good things and much love to come to each of them, as it should be. Regarding the ‘Tammy’ comment below; I can’t support your sad and offensive commentary. Your judgment and condemnation comes not from knowledge, but from an ignorance of the worst kind. It was heartless and ugly. I choose to believe in the light, love, and plan God has for all of us. I would never be so arrogant to… Read more »

Can’t support sacrificing family, love, and a successful marriage to allow celebrity to emerge, gotta determine what’s truly important in life. What about the vows they took before God? Tv show wasn’t worth it. America can find some other way to amuse themselves for an hour. Family first. Now she’s just a big haired, fake nail wearing, narcissistic woman who before long will be unfulfilled and looking for a date making it a part of the script, eh, I’ll pass!

Love Long Island Medium, I pray that Teresa and Larry can mend their Marriage and make time for each other.
♥️♥️

I live in the Uk, and I love to watch Theresa Caputo on Long Island Medium. I just really hope she does a tour here in the UK sometime soon!

I love watching Theresa on Long Island Medium, and don’t want to see Larry! He is not necessary for the show to continue.

But he was a part of the show. That doesn’t mean Theresa can’t continue with out him. But there will be a hole where that member was.

can’t wait for her to comeback.