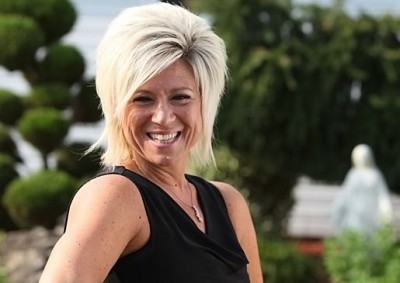 The Long Island Medium is back. Recently, TLC announced the TV show will return with new episodes in April.

The new season will follow Theresa Caputo as she “continues to share her gift of healing and comfort and connecting people with those who have departed, all-the-while searching for her own answers in her personal life.”

TLC’s hit series, LONG ISLAND MEDIUM will air brand new episodes beginning Sunday, April 8th at 8:00pm ET/PT. Last December, the season ended with a question mark over Theresa and Larry’s relationship as fans followed them through what has been their most emotional and personal journey yet. Putting on a brave face this season, Theresa continues to share her gift of healing and comfort and connecting people with those who have departed, all-the-while searching for her own answers in her personal life.

In an emotional two-hour premiere, Theresa heads to Fire Island and conducts one of the most powerful group readings of her life. Later, Theresa and Larry confront their issues and have an intense conversation about the future of their marriage. Other highlights from the season include a true behind-the-scenes look at Theresa on tour as she travels across the country for her live shows; a special “knock and shock” episode full of fun surprises and a two-hour celebrity finale featuring Buddy Valastro of TLC’s CAKE BOSS, Grammy-Award winning singer and song writer Melissa Etheridge, actor Tituss Burgess (UNBREAKABLE KIMMY SCHMIDT), actor Robert Patrick (TERMINATOR, THE X-FILES) and Jillian Michaels (THE BIGGEST LOSER).

LONG ISLAND MEDIUM is produced by Magilla Entertainment for TLC.”

What do you think? Do you watch Long Island Medium? Will you catch the new episodes?

Yes, I definitely will be tuned in. I think she is AWESOME. I have been a fan for many years and loved the show. Both of my parents past away within 7 months of each other and watching her since they have passed is totally different for me now. And watching her pass on messages to everyone that they desperately we’re in need of wether they knew it or not is life changing.

Hi Theresa, I just want to say that may God bless you for the challenges you and Larry are facing with your marriage. I pray God will make the right decision for both of you that you are both at peace in life. I love your show and it is so nice seeing you help others during the loss of their love ones. God Bless you and may God bring a life full of love, joy, and peace to you and your family.

I love the show! But what’s with all the reruns when the new episodes should be on?

I will definitely be watching. I see and feel also, but on a much smaller basis. I wish her and her family the best outcome in all their live paths.

I will be watching! Wonderful show !