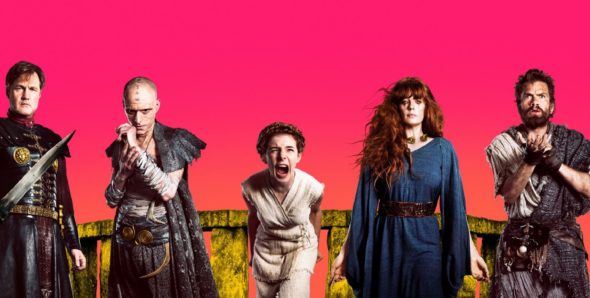 The Britannia TV show has been renewed for a second season on Sky Atlantic, as well as Sky’s streaming service NOW TV, which services UK and Ireland. Sky Vision handles the international distribution rights — excluding the United States. The first season of Britannia was an Amazon Prime Original in the US and was the first co-production between Sky and Amazon Studios. We’ve reached out to inquire as to whether Amazon has renewed Britannia for season two, as well. When we know more, you will, too.

Learn more about the Britannia season two renewal from this Sky press release.

Viewers are set to journey back into the deep, dark and unruly world of Britannia, as a second series of the unique Sky original production is coming to Sky Atlantic and TV streaming service NOW TV next year, with filming starting in spring 2018.

Written by multi-award winning Jez Butterworth and Tom Butterworth starring David Morrissey, Kelly Reilly, Zoë Wanamaker and Mackenzie Crook, Britannia launched earlier this year to great critical acclaim. The series was the biggest Sky original production launch on Sky Atlantic since Fortitude series 1, with the first episode watched by a cumulative audience of 1.88 million. To date, the series in total has had more than 10 million downloads and views on demand through Sky set top boxes, the Sky Go app and TV streaming service NOW TV. It’s also been the most downloaded Sky series in Ultra HD and has been sold in 206 territories worldwide.

Set in 43AD, the drama followed the Roman army as they returned to crush the Celtic heart of Britannia, a mysterious land led by warrior women and powerful Druids who claim to channel the powerful forces of the underworld. Like never before, the nine-part series told the story of the emotional and physical power struggles between three tribes: the Druids, Celts and Romans, who battle for the heart of Britannia. Series two, written by Jez, Tom AND JOHN-HENRY Butterworth, will continue to explore the life of the Celts and Druids now living under Roman rule.

Cameron Roach, commissioning editor for drama at Sky, said: “The first series of Britannia brought Jez’s unique vision to life. The series is a tale of clashing faith systems, torn apart families, mystic men and fearsome queens, all told with humour, heart, epic drama and violence. Drama on Sky is about the unexpected, the visceral and the memorable, it’s about stories told in a way you won’t find anywhere else. That’s why we are delighted to be working with Jez and the production team on the next instalment.”

All nine episodes of the first series of Britannia are available to watch on Sky Atlantic and TV streaming service NOW TV.

What do you think? Did you watch the first season of the Britannia TV series? Should it be cancelled or renewed for season two on Amazon?

Just finished the first season and am hoping for a second

Please, yes. I’m hooked now after season 1 and wish for many more.