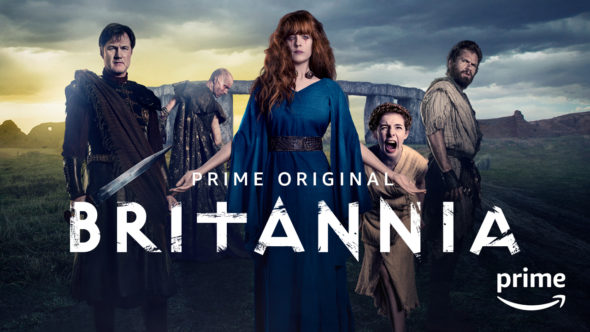 TV show description:
From creators Jez Butterworth and Tom Butterworth, the Britannia TV show is a British historical drama, which airs on Sky Atlantic in UK. The story kicks off in the year 43AD, at the far reaches of the Roman Empire.

A century earlier, even Julius Caesar was been unable to subdue the wild land of warrior queens that is Britannia. Now, the Roman invasion will leave an indelible mark on the Celts and Druids.

General Aulus (Morrissey) oversees the 400 ships bringing 20,000 men to Britannia. They intend to conquer it and civilize its peoples, in the name of Emperor Claudius.

Bright, brave, and brutal, Aulus Plautius is among the most important Roman legion commanders. Although his emperor has ordered him to conquer Britannia, Aurus plans to pit competing tribes against one another — to that end, as well as his own.

His strategy involves presenting himself as an ally, so as to earn his targets’ trust, until such time as they prove disposable. Still, Aurus has a secret he refuses to share — he is convinced the Druids understand the mysteries of the universe and may well play into his plans — not for the empire — but for himself.

As a prefectus, Lucius (Speer) is Aulus’ second in command. Rigid and exacting, he brooks no insolence on either his own behalf, or that of his men. Once he’s on Britannia, Lucius realizes the general — his old friend — seems nearly obsessed with the island’s mystical Druids. As the situation intensifies, Lucius feels burdened by dueling loyalties.

Pellanor (McDiarmid) is King of the Cantii and is steeped in the ancient ways. While he is offended by Rome’s very presence, he does not think this new army of invaders will be any more successful than Caesars.

The Cantii’s war with the Regni tribe takes up most of his attention, and the rest of Pellanor’s focus is trained on his family, particularly his reckless daughter, Kerra (Reilly). He stands steadfast in his faith that the Druids are touched by the gods, so he will do their bidding, no matter the cost.

Although she is an accomplished warrior among her people, Kerra can be stubborn, and her demeanor has not helped mitigate tensions between the Cantii and Regni. Now Pellenor treats her like a prisoner rather than his child.

Kerra rejects her father’s faith in the Druids, who executed her mother as she looked on. She yearns to liberate herself from her tribe and its gods. Meanwhile, destiny has plans for her.

As Pellanor’s son and heir to his throne, Phelan (Rhind-Tutt) is his father’s right-hand man. While he is more practical and reasonable than the king, the Cantii don’t believe he is cut out to lead.

His ambitious, manipulative wife, Amena (Scholey), sees her husband as her stepping stone to the throne. By edict of the Druids, she is also married to Lindon (Weber), for political purposes. He dislikes her though, and feels a powerful connection to Kerra.

When the Romans pillage his village, they kidnap and enslave the Cantii, Sawyer (Ward). A rebellious soul, Sawyer is subject to savage punishment. When his young daughter Cait (Worthington-Cox) tends to him, he realizes how strong she has become, and her strength fuels his hope.

The Regni’s Queen Antedia (Wanamaker) once tried to make peace with the Cantii. Following the Druids’ decree, her son Gildas married Kerra, but their union ended as quickly as it began, and now Antedia has no heir. Certain she has been stabbed in the back, Antedia is hellbent on vengeance, and hopes to use the Romans as a mean to her ends.

On the night before the solstice, Cait was set to complete the initiation into womanhood. When the Romans attacked, she was left “betwixt.” While neither a girl nor a woman, Cait is stronger than she once imagined. She may prove key to the fates of the tribes, the Druids, the Romans, and even Britannia.

Once a Druid, now a hermit, Divis (Kaas) is now nearly shunned by both the Cantii and the Regni, which is fine with him. When Rome attacks, he experiences a vision which reveals the Roman army to be the Earth demon Lokka — in the flesh.

Divis believes he may be the only one who can stop this evil from overcoming his homeland. When he sets out to do his duty, he feels encumbered by Cait, whom he saved from the Romans.

Reputedly the second man in this world, Veran (Crook) is rumored to be 10,000 years old. The tribes consider him privy to the mysteries of the universe and accept that he speaks for the gods. When the Roman forces land, he welcomes their presence in his own way, but the question remains: why?

Meanwhile, inland, the bloody battle continues on the Cantii – Regni border. Can they make peace and repel the alien invaders? Will Rome prevail? Stay tuned.

What do you think? Do you like the Britannia TV series? Should this TV show be cancelled or renewed for another season on Amazon?

i love it. would to more. great potential for cult following