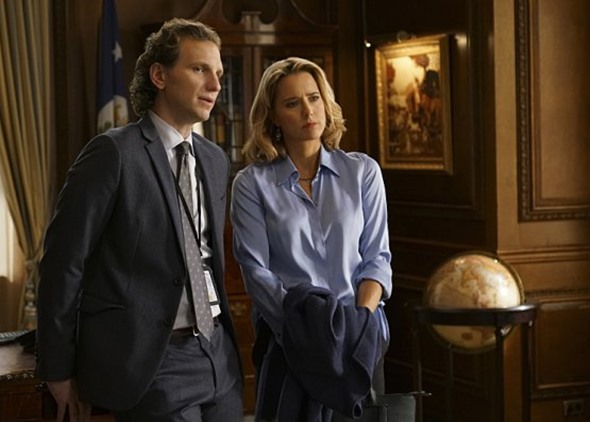 The Madam Secretary TV series has been renewed for a third season on CBS. The political drama, starring Tèa Leoni, Željko Ivanek, Bebe Neuwirth, Tim Daly, and Keith Carradine, was one of 11 series CBS picked up today.

Madam Secretary features Secretary of State Elizabeth Adams McCord (Leoni). Clever and tenacious, she oversees international diplomacy, deals with office politics, and sometimes colors outside the lines, at work and at home.

Along with the renewal CBS announces it will finish this television season as America’s most-watched network for the 13th time in 14 years.

What do you think? Are you a fan of the Madam Secretary TV show? Do you plan to watch the third season? Tell us.

Absolutely. One of the best shows on tv from the get go.

Madam secretary is one of CBS’s best shows

We have enjoyed Madam Secretary all two years. The plots are interesting and suspenseful. And the show presents the USA as a strong force with intelligent decision making.

looking forward to another season of MADAM SECRETARY

I enjoy this show and so glad it is not following 60 minutes. I look forward to watching it week. Thank you for renewing.

Love this show , we need more shows with substance like this one.

Love Madam Secretary. We need a show that addresses real life. Not fru-fru show that much about nothing.

I love this show and will definitely watch

Love this show. Very happy that they renewed it. We record and binge watch.

It is CBS’s Downton Abbey. Couldn’t have made a better choice, CBS!

Great news! Made my day!!

So glad that there will be a 3rd season. Such a great show.