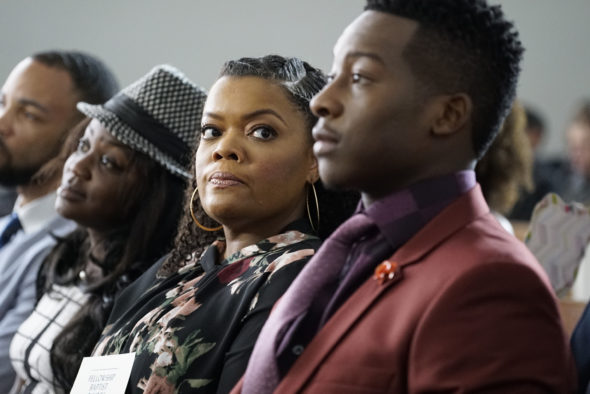 Stop me if you’ve heard this one. A new show kicks off with lackluster ratings, so the cast and/or crew try to rally fans online, so that it won’t be cancelled. Yvette Nicole Brown, who knows all about TV series cancellations, co-stars on The Mayor TV show on ABC. The Community veteran took to social media over the weekend to remind viewers that if the sitcom doesn’t draw more viewers (particularly those in Nielsen households), a second season renewal is unlikely.

An ABC comedy from creator Jeremy Bronson, The Mayor stars Brandon Micheal Hall, Lea Michele, Bernard David Jones, Marcel Spears, and Brown. After years of drudgery, hip-hop artist Courtney Rose (Hall) runs for office to boost his music career and accidentally wins. Despite a choice timeslot following Black-ish, The Mayor seems to be hemorrhaging viewers for the Alphabet Network, so it won’t be surprising if Mayor Rose doesn’t finish his first term.

The Mayor: A Look at the Ratings

The first season of The Mayor is averaging a 0.90 rating in the 18-49 demographic and 3.16 million viewers. Of the 17 scripted ABC TV shows we’re currently tracking, The Mayor ranks 12th in terms of its demo ratings and 14th in terms of average total audience size. These numbers are pretty weak for a brand new show with a solid lead-in. If it doesn’t turn around, expect The Mayor to be cancelled.

Reaching out to fans via Twitter, Brown reminded them that ultimately, TV is a business, and cancellation and renewal decisions depend on television ratings. Check it out.


Yes guys our ratings for #TheMayor could be better. I love our sweet, positive show & wish more folks were watching but God's will be done ❤


We are making a fun, positive, conscious show. If we are blessed to do it for 8 seasons or are a 1 & done. I will remain proud of the show.


Entertainment is a business first, guys. Shows have to perform. They have to be profitable. It's that simple. Ratings equal profits.


.@ABCnetwork has been extraordinarily kind to our show. They set us up to win. Nielsen viewers need to tune in for that to happen. #Business


I tell you all this to explain how it works for those who don't know. All is well. And again, may God's will be done. ❤

What do you think? Are you a fan of The Mayor TV show? Will ABC will cancel or renew this new TV series for season two? Could they save it by re-scheduling it or doing something else? Let us know, below.

Perhaps a reason is the show isn’t quite that good.

It just doesn’t entertain me.