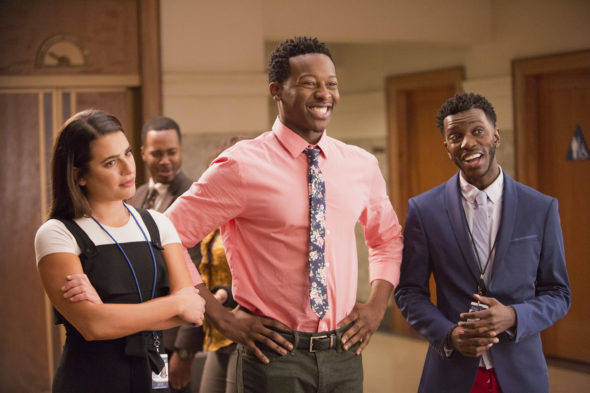 Why didn’t The Mayor succeed? This week, ABC boss explained why the freshman TV series was cancelled, TVLine reports.

The comedy centers on Courtney Rose (Brandon Micheal Hall), a hip-hop artist who decides he needs a publicity stunt to create some buzz around his fledgling music career. To that end, he runs for mayor of his hometown of Fort Grey, California and scores a surprise win. The cast also includes Lea Michele, Bernard David Jones, Marcel Spears, Yvette Nicole Brown, and David Spade.

At this year’s TCA winter press tour, ABC chief Channing Dungey revealed why she thinks The Mayor never caught on with audiences:

I feel like the show arrived on the scene at a time when people were feeling a little bit fatigued about anything that had to do with politics. And I think even our title, The Mayor, maybe didn’t help us because when you watch the show it was so much about that workplace family, as well as his relationship with his mom, and [not] so much about politics.”

The issue did not seem to be one of the audience not knowing that the show was there, which is sometimes the case. People knew — they just didn’t come. And what was more disappointing for me, personally, was the delayed viewing numbers also continued to drop. And that’s the biggest signal that, ultimately, for whatever reason, it was not a show that’s connecting.”

What do you think? Did you watch The Mayor? Do you think ABC should’ve given the show a second chance?

It was a funny show with relevant storylines, and not just to Black viewers and communities. Just where are those Nielsen boxes because good shows keep getting canceled and I know viewers are watching them, Rosewood, The Mysteries of Laura, Limitless, Rush Hour, Undateable, and many others. Disappointed that The Mayor has been cancelled by ABC; I really hope it’s picked up by another network, NBC could use a comedy. How about USA, CW, TNT OR TBS?

I loved the show very sad it has been cancelled

For the same reason most other comedies get cancelled. It wasn’t funny.

Why didn’t The Mayor succeed? because it was stupid?

No I didn’t watch

I enjoyed the show and found it refreshing. Sorry to see it cancelled.