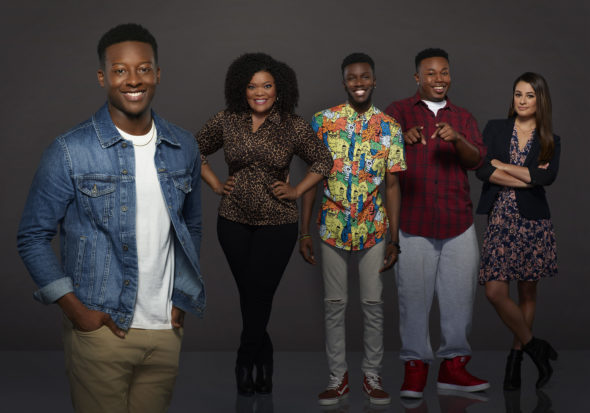 Has there been a recall election? Is The Mayor TV show cancelled or renewed for a second season on ABC? The television vulture is watching all the latest cancellation and renewal news, so this page is the place to track the status of The Mayor, season two. Bookmark it, or subscribe for the latest updates. Remember, the television vulture is watching your shows. Are you?

Airing on the ABC television network, The Mayor stars Brandon Micheal Hall, Lea Michele, Bernard David Jones, Marcel Spears, Yvette Nicole Brown, and David Spade. After years of drudgery, hip-hop artist Courtney Rose (Hall) decides he needs a publicity stunt to create some buzz around his fledgling music career. To that end, he runs for mayor of his hometown of Fort Grey, California and scores a surprise win. While Courtney’s intelligence and creativity lend themselves well to his new position, this is his first full-time occupation, so he needs a little help growing into the role. Fortunately, he gets it from his mom, Dina (Brown), friends TK (Spears) and Jermaine (Jones), and Chief of Staff, Valentina Barella (Michele).

The first season of The Mayor is averaging a 0.81 rating in the 18-49 demographic and 2.94 million viewers. Find out how The Mayor stacks up against other ABC TV shows.

The Mayor debuted to mediocre ratings and they’ve gotten worse. Though the network would like to establish another new comedy series, I suspect that The Mayor TV show will be cancelled. I’ll keep an eye on the ratings and will update this page as I gather more information. Subscribe for free updates on The Mayor cancellation and renewal news.

1/5 update: As expected, ABC has cancelled The Mayor before season one finished airing, but the studio hasn’t given up. Details here.


What do you think? Do you hope The Mayor TV show will be renewed for a second season? How would you feel if ABC cancelled this TV series, instead?

I LOVE THE MAYOR, I RECENTLY WATCHED AND I ENJOYED IT ALOT , IT IS A WOUNDERFUL SHOW WITH BEAUTIFUL SENSITIVE AND FUNNY BLACK MEN. PLEASE KEEP IT COMING WE NEED TO SEE MORE EPISODES.

Got bored after 4-5 epys. Got cancelled anyway.

I Love the Mayor. I watch it with my 12 and 7 year old kids. It wonderful to watch a show with beautiful, sensitive, and funny black men. Please keep it coming we need more episodes.

I love The Mayor. It is a really great wholesome show. I think it shows very positive messages each week. Please renew this show for another season. It is the only new show this season to me that is worth watching.