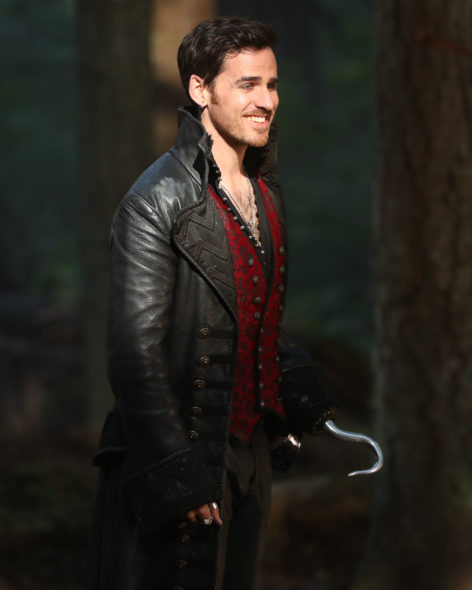 It’s time to wish upon a star for a happy ending. The Once Upon a Time TV show will end after seven seasons on ABC. Last month, during TCA winter press tour, ABC Entertainment President Channing Dungey said she was “cautiously optimistic” about a season eight renewal. While no one is outright saying Once Upon a Time is cancelled, it is ending, and the network seems to have made the decision, not creators Adam Horowitz and Edward Kitsis.

The seventh season of Once Upon a Time is averaging a 0.54 rating in the 18-49 demographic and 2.49 million viewers. Compared to season six, that’s down by 42% and 21%, respectively. After spending six seasons on Sunday nights, ABC moved Once to Fridays this year, which accounts for some of the drop. For some fans, though, the story ended last year, with the exits of Emma, Snow, and Charming.

Out of the 18 scripted ABC TV shows we’ve been tracking during the 2017-18 television season, Once ranks 17th in terms of its demo numbers and only rises one spot to 16th place, in terms of total audience size. When this season ends it will have a nice, fat syndication package, so the cancellation (or decision to end the series) makes sense.

EW published statements from ABC execs on the end of Once Upon a Time. Check it out.

Here’s Dungey’s statement on the end of OUAT: “When we first heard Adam and Eddy’s pitch for Once Upon a Time, we knew it was something incredibly special. For seven years, they have captivated us with their creativity and passion while reimagining some of our most beloved Disney fairytales, creating an undeniable global hit. Saying goodbye will be bittersweet, but Once Upon a Time will forever be part of the ABC legacy and we can’t wait for fans to join us in this epic final chapter.”

Added Patrick Moran, president of ABC Studios: “Once Upon a Time has been an amazing journey for all of us at ABC Studios and for fans around the world. We’re so proud and appreciative of the hard work and creative talent that Eddy Kitsis, Adam Horowitz and their cast and crew brought to this show for seven magical seasons.”

The news outlet also published an official statement from Kitsis and Horowitz:

Seven years ago, we set out to create a show about hope, where even in the darkest of times, a happy ending would always be possible. But we never imagined the happy ending that was actually in store for all of us – years and years of adventure, romance, magic and hope. We’re so grateful to our brilliant collaborators – the cast, crew, and writers – as well as our partners at the studio and network for making this journey possible. But most of all, we want to thank the fans. Their fierce loyalty and devotion was the real magic behind Once Upon a Time. We hope they join us for these last few hours as we journey to the Enchanted Forrest for one more adventure.

EW then talked to the duo about the end of their long-running fantasy drama. Here’s more:

ENTERTAINMENT WEEKLY: What came with the decision to end the show? Was that ABC’s decision or yours?

EDWARD KITSIS: Listen, we love this show, we were happy to continue going on, but collectively they felt that, after seven years and 156 episodes, it was time. For us, we’re like, “It’s a hell of a run.” We never thought we’d get to seven episodes, let alone seven years.

ADAM HOROWITZ: It wasn’t like it was a shocking phone call. We’ve had conversations for a while about what this year would be, and whether it would go on or not, and if this could be the end, so we’ve been prepared for this for a while. The network has been incredible partners with us the whole way, as has the studio. Ultimately, it’s also a business, so it becomes about, “Is it financially viable to keep going forward?” so there’s all that kind of stuff, stuff that we generally don’t deal with because we’re just focused mostly on the creative. We reached that point where it’s like, “Okay, now it’s time to wrap it up. This has been an amazing 156 episode-run, and let’s all be proud of what we’ve done and try to wrap it up.”

What was your first reaction when you found out OUAT was going to be wrapping up this year?

KITSIS: We felt grateful for the opportunity. Obviously, we felt sad that, after seven years of living in this universe, [it’s over]. It has been so creatively rewarding, but at the same time, we have got everything out of Once that we ever dreamt of and we really can’t complain, and we really can’t feel sad. We just feel really grateful for what we accomplished — 156 episodes, seven years is a good run.

HOROWITZ: It’s funny because it wasn’t like it was a shock. When we spoke on the phone with them about it, it was like more like, “Okay, it’s time. This feels right. This feels like we’ve had a great run, let’s try to end the show in a way that will leave the fans with a good feeling about what Once was that will stay with them past the end of the show.”

Has ABC given you enough notice to be able to properly wrap things up?

KITSIS: Yes, I would say that we did not go into this season assuming there would be a season 8, so we had two paths for the finale — one where it was closed-ended, one where it was open-ended. We had been building toward it the whole year anyways, so instead of a cliffhanger, it will just be a closed-ended story that wraps it up. But we’re prepared and ready, so we weren’t shocked by it.

HOROWITZ: Yeah, these are conversations, again, that we’ve had for many months with the network about the possibility of this, so we’ve been preparing and always known this was a real possibility.

Horowitz and Kitsis also said to expect some old familiar faces in the Once Upon a Time TV series finale, but didn’t name names. Finally, while they’re ready to move on, they remain open to a spin-off, reboot, or revival sometime in the future.

What do you think? Did you expect Once Upon a Time to be cancelled or renewed for season eight? Now that this ABC TV series is ending with season seven, does it feel like the right time to you? Sound off, in the comments.

The show should have ended after season six. It was a good conclusion. Bringing it back with fake Hook, a new wooden lead (Cinderella is appallingly bad), Regina powerless and Rumple without his edge, son or wife was just a bad idea. They should have fixed it after the terrible Peter Pan storyline and dark one Emma was just pointless omg she kept Hook alive how could she (rolling eyes). Time for it to go.

This is a great show with so much more to explore. Should never have been moved to Friday night.

I don’t think it should be canceled! You moved it to Friday Nights and that changed your ratings. I always looked forward to Sunday night and Once Upon a Time. Instead it’s Football all night.
Not Happy, Poor Decision on ending the Season!!!

It was time to put this dog out of its misery. Seasons 5 and specially 6 were a drag and it should have ended there. I saw not even 30 mins of this new season and immediately stopped watching from then on. RIP Storybrooke

I’m so glad they’re finally putting this poor, mistreated show to rest. As a fan of certain characters, I’ve stuck with it (miserably, for the last four+ years) solely to see them, but the writers have done some disgusting things with what were amazing characters and storylines over the last few seasons. When they turned it into Once Upon A Hook and twisted all of the characters (and killed off at least one) to cram more of him down our throats, cutting most of the rest of the cast’s screentime by half to put him front and center, we could… Read more »

Sorry if that is true but, I lost interest when they took a childhood icon and made him irredeemable. Bad going good is what we hope for: good turning out to be pure evil is such a let down. Go back to the basics and end in a good note for the sake of viewers who want to see characters they came to love have a happy ending.

This has been a trainwreck for at least the last three seasons, not up to par of the earlier seasons. I’m surprised it made it this long, but not much is expected of a Friday night show. I watch TV for quality shows, not because I’ve nothing better to do.

I really hope this season would not be the last. It’s modern fairy tale that insprises me in, change me. And it’s so sad to say goodbye.
Thank you for bringing this great show come to live. ‘This is the greatest show!’

Let’s be honest, after they moved it to Friday, the funeral was already being planned, and honestly, I was surprised it made it past 6. At least they’re letting A&E finish it, hopefully on a better note than Season 6’s wet firecracker. Au revoir, Storybrooke, we’ll miss you

ABC made a smart decision to end the show. It was great for the 6 seasons with the main cast and s7 should never have happened. That said I will miss the show and strangely this news made me sad but mostly relieved.

Another Quality Show being made to End. Meanwhile we still have our Shows’ that show Breasts’, tiny lounge wear and still more jokes’ about the Women in them. Let’s not forget the ***** jokes’ too. But we still got Murder Show’s and useless and BORING singing Shows’ to THRILl us….AHHHH TV at it’s Best..

I don’t know why they kept it on this long!

Thanks everyone, great show!