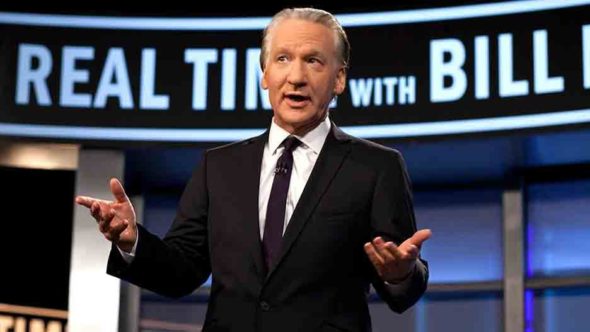 Count on Saturday morning headlines about Bill Maher. HBO has renewed the sometimes controversial Real Time with Bill Maher series for seasons 21 and 22, keeping the Friday night show on the air through 2024. The late-night series is currently in its 19th season and was renewed through season 20 in September 2020.

Here’s HBO’s press release about the most recent renewal:

HBO has renewed REAL TIME WITH BILL MAHER for two more seasons, it was announced today by Nina Rosenstein, Executive Vice President, HBO programming. The series will air on HBO through 2024 and will be available to stream on HBO Max.

“After 19 seasons, REAL TIME WITH BILL MAHER remains a Friday night destination for fresh perspectives and smart conversation about today’s most relevant issues,” said Rosenstein. “His weekly editorials are insightful, must-see viewing in his signature voice, and we’re proud to continue our relationship with Bill and the incredible team at Real Time.”

“I’m thrilled to be signing such a fabulous deal with the bestest network,” said Maher. “What can I say – beginner’s luck!”

Maher headlined his first special on the network in 1989 and has starred in eleven solo specials to date, including the hour-long presentations “Bill Maher: Live From Oklahoma,” “Bill Maher: Live from D.C.,” “Bill Maher… But I’m Not Wrong,” “The Decider” and “I’m Swiss” (both nominated for an Emmy in the Outstanding Variety, Music or Comedy Special category), “Victory Begins at Home,” “Be More Cynical,” “The Golden Goose Special” and “Stuff That Struck Me Funny,” and two half-hour stand-up specials, plus the specials “30 Seconds Over Washington” and “Comic Relief VI™.”

Check out our status sheets to track new TV series pickups, renewals, and cancellations. You can find lists of cancelled shows here.
What do you think? Do you watch the Real Time with Bill Maher series on HBO? Are you glad to hear that it’s been renewed through 2024?

As soon as my cable TV provider says “We are raising your rates” My cable TV package is gone, and I won’t miss this stupid clown or Oliver for one second.

Today is now
Reply to  worthymagic

Genre of talk show host are obsolete. And also John Oliver. Are used to enjoy John Oliver but it’s just old now it’s not nothing new everything is outdated. So I won’t be tuning in anymore Neither of these two