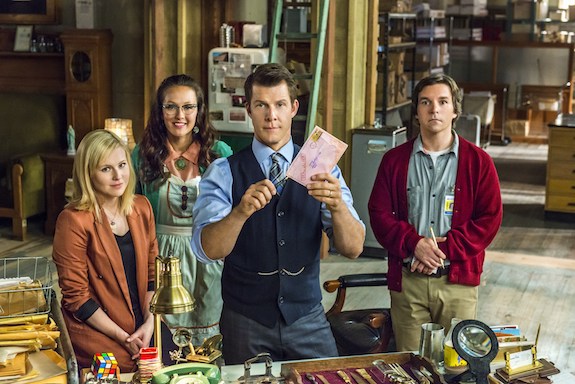 Get ready for another installment of Signed, Sealed, Delivered. Recently, Hallmark announced the TV movie franchise will return this year.

The new Signed, Sealed, Delivered movie, The Road Less Traveled, premieres onHallmark Channel on February 11th at 7 p.m. ET/PT. You can read more info and see photos of the cast below:

“Viewers have a strong appetite for our mystery programming, as reflected in the ratings surge that Hallmark Movies & Mysteries has experienced with continued year-over-year growth,” said Michelle Vicary, Executive Vice President, Programming and Network Publicity, Crown Media Family Networks. “We’re thrilled to introduce new franchises to complement returning viewer favorites as we take sleuths on smart, exciting and thrilling adventures through our storytelling.”

Love “Signed, Sealed, Delivered”. Recorded it on DirecTV but bad weather caused interference. Where can I get the movies, or when will they be on again, so I can share with my granddaughters? I’ve really turned them on to “Hallmark Movies and Mysteries”.

Please please continue this series or movies. The postables foursome have given us such wonderful stories of love and friendship with blissful tearjerker endings. Need more. “Make Someone Happy.” Me and your fans.

I love the Signed, Sealed, and Delivered series! I have watched all of the movies and bought the DVDs as well. I will buy more as soon as they come out. Thank you Cast and Producers!

I really enjoy this show and it’s characters. Shane, Oliver,Rita and Norman are always so engaging and lovable. The story lines are heartfelt and kind. In a world where our headlines are filled with one horror after another this show allows us to take a brief moment of blessed relief. We need this and rely on Hallmark to produce shows like this for us. Please do not take remove this wonderful show from your schedule…….it is a jewel!!!

Really loved your latest show, “To the Altar”. Was this the TV series finale??? NO! NO! NO!

Please bring back sign sealed and delivered,even thought the series final was not as good as the other movies made I think it is the most up lifting and spiritual show and we need it please bring it back

Yes, I already watched the show which was on 7-15-18 and it was terrific. It is my favorite show on TV.

I love the shows and would hate to see them cancelled.

I just watched the series finale and cried through the last half of it! I am going to miss this series so much and was not expecting it to end, this soon. I wish you would bring it back!!

Just watched the series finale and cried through the last half! It was so good, I have watched the different ones, over and over! I am going to miss this show so much!

I didn’t realize that To The Altar was being considered the “series finale”. Was there something in the media stating that it was the finale and I missed it. I hope not as this is my favorite show on television. I love the characters, the writing, the actors are superb and I love the uplifting stories each movie creates. Brilliant work of art by all concerned. Please renew SSD for another year, PLEASE!!!!

Best of All the Hallmark movies

My friends and I call the show SS&D. We can’t wait for the next releases. Watched the first year series, and hated to wait months the next year for 1 movie at a time to be released. This series is an antidote to the crazy world we live in now. Do not stop producing these shows—-love every moment!! You could do years worth of SS&D without repeating!! Bring back the series, But if you have only a movie option, then make more than 1 show every 3 months. And, as a regular Hallmark channel viewer, would rather see 100% programming… Read more »

Agree with every word you said. Best show on television. I hope they keep making them

Is there going to be another one coming soon? I Love signed, sealed, delivered. By far the BEST Hallmark movie series.

We want news about new episodes beyond the July movie.

Yes. I love SSD and want episodes to continue. I want to see Shane and Oliver married too!