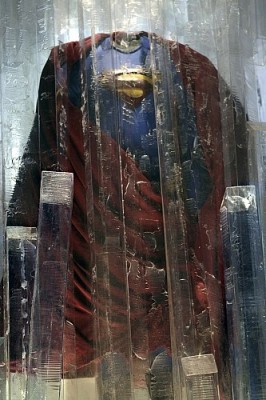 Have to say, my favorite part was the moment he flew..I was so disappointed when all the problems just disappeared within a minute of each other and the fact he didn’t introduce himself to the public but after 10 seasons, I just can’t believe its over

That was an amazing ending to a very long, drawn out 10 Years! I was 15 when this show first started and am now 26. I love how it all worked out in the end. I did not expect to see Tom Welling up close in the suit at all so I’m not disappointed, I knew they would do the far shot CGI thing. The bringing back of Lex, flashbacks (Clark’s Trials and Lex’s memory going bye bye), Clark legitimately flying for the first time, the ending music and the wrapping of Clark’s shirt at the end to reveal the… Read more »

It was crap. The whole final season was crap. I completely blame the showrunners who came in once Gough and Millar left. They can throw out all the platitudes they want, the show was once an enjoyable event but it became a weekly disappointment. Oh, and Rosenbaum is a douchebag who will be lucky to have his marginal comedy show renewed and Tom Welling is a class act whom I will always respect. Finally, looking forward to watching Cassidy Freeman on A&E’s new show Longmire.

I enjoyed the ending of the series, but there was too much lois and clark wedding crap. Should have been half wedding and wrap up and the other half ACTION.

My 8 year old said “why all the talking?” The whole show was living out old memories.. to much should i shouldn’t i and no real good story. No good body shots (with the suit) This episode is only good for girls and their love stories but not a good episode for guys. What were you people thinking?

Best episode in the 10 years of the show! I hate the cw for cancelling it! I hope to see Tom and Erica on the big screen with something to do with Superman!

I LOVED the finale. Hard to pick a favorite part. I loved how they brought Lex back, loved seeing him in the suit, loved the superman music, loved the scenes from past episodes….great way to end a great show

It was a good farewell , it was not the best for me as a fan.He finally wore the suit ,kinda. You can only see him far away or not up close where can see him ,in a way I kinda understand too!With the superman movie coming next year the powers that be want fans to wait until henry cavill wears the costume.

I thought it was awesome, but dammit! Not one full body shot of Tom in the suit? Ugh! But all the other goodies they sprinkled throughout the finale made up for it!

Well, I am disappointed Darkseid himself did not fight Clark. I am also disappointed that they taunted us like someone hanging a big bag of treats over a puppies head but he can’t get to them! We saw “Superman” but not up close, and they never said “Superman”… Come the !@#$ on.. 10 years and they can’t even give us a full shot of Tom the man born to be Superman in the suit?! At least call the damn guy Superman!

I hated it, I’m sorry. There were so many bad moments. I was really hoping it was going to be awesome; however, I’m extremely disappointed. I did enjoy the blurry, CGI Superman and only close up of Clarks face. But, the episode was just filled with bad moments.

the first few years of smallville were the best,and the last two not so great,but the finale was a good way to end.even though its sad that there will never be a new episode and lex had is memory erased and you get the idea that well that sucks that clark and lex wont share those memories again,even though theyre now enemies,it was a good transition to the man of steel

It was pretty awesome. I give it a 9 out of 10. The writers did an excellent job making the ending fit well with the Superman story. Well DONE!

The episode was good, however, I was a little disappointed that Clark and Lois didn’t actually tie the knot. I enjoyed Clark actually putting on the suit and embracing his distiny as SUPERMAN. I also liked the clips from past episodes as well as the SUPERMAN theme music from past movies. Like I said ALL in ALL, a good epi, just disappointed about Clark and Lois nuptials not taking place.

i agree the clips from lex and clarks memories really toped it off,especially in the beginning when it shows previously on smallville it brought the last 10 years together,lana pete chloe,friendship of lex and clark..fantastic!