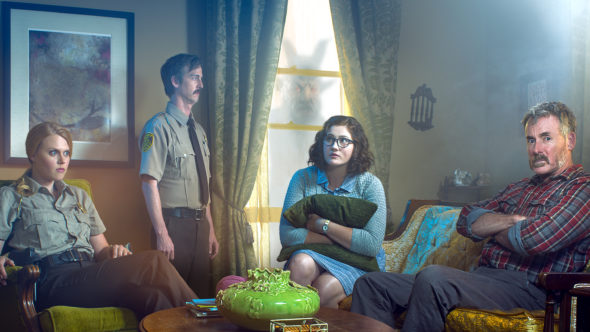 Stan has trouble relinquishing his authority to Evie Barret (Janet Varney), the tough and beautiful new sheriff in town, but they form an unlikely alliance when both begin to realize things are not quite right in their quaint New England town.

Together, Stan and Janet valiantly fight a plague of unleashed demons that have been haunting the town, which just happens to be built on the site of a massive 17th century witch burning.

Series Finale:
Episode #24 — Stan Against Evie
Haurus demands Stan kill Evie in return for killing Constable Eccles and ending the curse on Willard’s Mill; another demon tells Stan how to defeat Haurus but the cost could be high.
First aired: November 21, 2018.

What do you think? Do you like the Stan Against Evil TV show on IFC? Do you think it should have been cancelled or renewed for a fourth season?

I LOVE THAT SHOW. Love Stan and his daughter. They crack me up. Can’t wait for it to start up. Definitely looking forward to it.

I have never so scared and entertained at the same time. One of the best shows right now and great cast!

I love this show! The story line is unique and the actors and actresses are irreplaceable. They all get along in the show and atans whitty comments are hilarious. Please do not cancel this show. I’m waiting for season 3 to make an appearance so I can record it.

Love this show. Most I have laughed over a show in a long time.

stan against evil is a great show!!!
please don’t cancel it

This show is very entertaining. Whole family loves it.

SO fun. I missed him from Scrubs.

It’s great, dirty fun! we need more shows like this!

I love this show! So do my teenage kids. Please renew!! So much fun to watch.