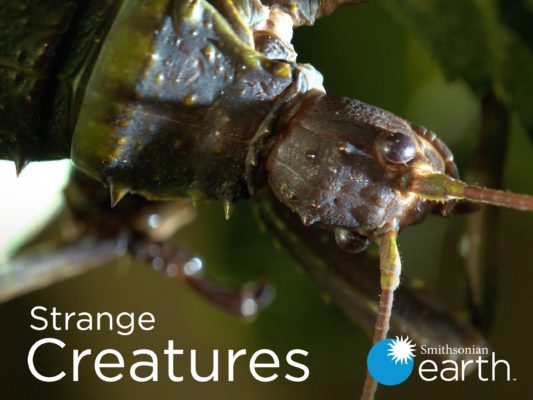 Smithsonian Earth is getting weird. Recently, the network announced season two of their TV show Strange Creatures is now available.

The nature docuseries “takes viewers to remote corners of the world to discover creatures often hidden from human eyes.” The new season features the hairy frogfish of the Indian Ocean, the South American giant cave cockroach, and “the misleadingly named kissing bug.”

NEW YORK – October 2, 2017 – Just in time for the Halloween season, uncover some of the weirdest, wildest and most peculiar organisms known to man with Smithsonian Earth’s STRANGE CREATURES. The second season takes viewers to remote corners of the world to discover creatures often hidden from human eyes. The series dives deep into the Indian Ocean to watch hairy frogfish walk – not swim – on the ocean floor, journeys to South America to find the giant cave cockroach (an insect with an immune system that rivals that of humans) and discovers the oddities of many more unusual creatures around the world. New episodes of STRANGE CREATURES premiere every Monday beginning today on Smithsonian Earth. Smithsonian Earth is available on Apple(R), Roku(R), Amazon, Android(TM) and at SmithsonianEarthTV.com.

The premiere episode, CHEMICAL WEAPONS, introduces the misleadingly named kissing bug, as well as the deceptive cuttlefish, a poisonous master of disguise. What sets these unlikely predators apart from other deadly creatures is their terrifying and inventive use of toxins to snare prey with brisk efficiency.

Subsequent episodes of STRANGE CREATURES are:

STRANGE POWERS Premieres Monday, October 9 When evolution bestows its gifts, it sometimes does so in ways that defy belief. From the coconut octopus’ mind-blowing mastery of camouflage to the sunburst beetle’s genius use of makeshift diving equipment, witness a stunning showcase of nature’s evolutionary superpowers.

OCEAN ODDBALLS Premieres Monday, October 16 If a creature looks remarkably odd, chances are you’re not focusing on the adaptations that give it a crucial edge. From the power-punching peacock mantis shrimp to the mind-bendingly fast jaw speed of the hairy frogfish, see the surprising prowess of some of nature’s oddest-looking survivors.

ANATOMY GONE WILD Premieres Monday, October 23 Prepare to be astounded by some of the most unusual body parts in the animal kingdom. Marvel at the translucent skin of the axolotl, the dominating digit of the aye aye and the southern cassowary’s menacing claws. Each offer an astonishing level of specialization that helps keep their owners alive and thriving.

GIANT CREEPY CRAWLERS Premieres Monday, October 30 Let’s face it: Insects are largely misunderstood. But a closer look at these crawling creatures reveals their inherent ingenuity. From the giant prickly stick insect’s extraordinary camouflage gifts to the peacock mantis’s ninja-like skills, peek into the daily lives of these fascinating specimens.

CAMOUFLAGE AND COLORATION Premieres Tuesday, October 31 If you can’t see them coming, you can’t escape them. Whether it’s the color-changing camouflage of the predatory cuttlefish or the shape-shifting antics of the mimic octopus, the name of the game is to hide in plain sight. Blink and you’ll miss these masters of misdirection as they evade – or create – danger.

What do you think? Are you a fan of nature documentaries? Will you watch the new season of Strange Creatures?