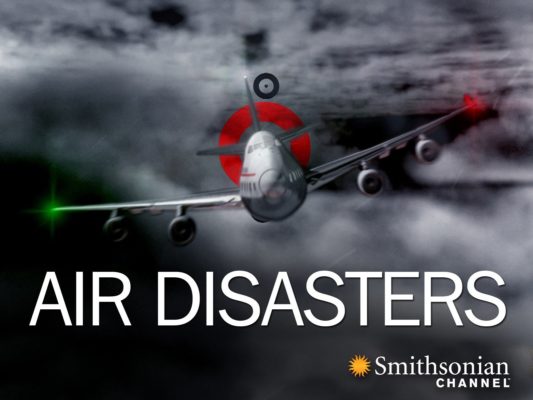 More trouble is taking off. This week, Smithsonian Channel announced the season 11 premiere date for the TV show Air Disasters.

The docuseries “feature exclusive eyewitness accounts, archival footage, dramatic reenactments, state-of-the-art CGI and interviews with survivors, family members and air crash investigators tasked with determining the cause of the tragedy.”

NEW YORK, August 23, 2018 – A 747 explodes in the skies above New York. An Indonesian airliner crashes in the jungle with no survivors. A Taiwanese commuter aircraft clips a highway on takeoff and plunges into a river. In the aftermath of the world’s deadliest airplane tragedies, the world is often left to wonder: What happened? Smithsonian Channel’s long-running series AIR DISASTERS returns with a new season to uncover the truth behind what went wrong and how to prevent these fatal crashes in the future. The 11th season of AIR DISASTERS premieres Sunday, September 30 at 8 p.m. ET/PT on Smithsonian Channel.

The season premiere, EXPLOSIVE PROOF, chronicles the tragic end of TWA Flight 800, which triggers the longest and most complex investigation in NTSB history. Just 12 minutes after takeoff, the aircraft is ripped apart by a massive explosion in the skies above New York. With a possible terror attack on their hands, the FBI joins the NTSB in an urgent search for answers. Initial wreckage and recovered data provide few clues, leading to the bold decision to rebuild the entire plane. Eventually, experts zero in on an exploding gas tank, prompting questions about how the jet fuel could get hot enough to combust and precisely what sparked the blast.

Subsequent episodes of AIR DISASTERS are:

After a routine flight, a Northwest Airlink commuter plane crashes in northern Minnesota, killing everyone on board. With no flight data recorder, the analysis of physical evidence becomes critical. Radar reveals the plane’s trajectory may have been deliberate to avoid icing, but why did the pilots fail to slow their rapid descent? The cockpit voice recorder raises disturbing questions about an inexperienced first officer. But as investigators dig deeper, they uncover a troubling pattern of abuse by the captain that led to a breakdown in proper management and human cooperation.

When a commuter flight to Detroit ends in a harrowing death spiral, it’s up to investigators to determine the cause and provide information to help prevent it from ever happening again. Evidence rules out initial theories of an in-flight fire. A problem with the plane’s propellers and a close analysis of the flight data lead investigators to the culprit behind the crash: icing. The final report raises questions around the FAA’s failure to establish adequate standards for flight in icing conditions.

Headed for South Korea, a Boeing 767 crashes into a hillside several miles from the runway. As the nation mourns its worst-ever air disaster, investigators face puzzling evidence: The surviving captain of the Air China flight claims that everything was normal, while air traffic controllers testify that the radio communications were anything but. Evidence reveals the crew had mishandled the precisely timed series of turns before touching down on the runway, and investigators are faced with the mystery of why the crew failed to correct the issue.

When an Indonesian airliner crashes in the jungle and claims the lives of all 234 people on board, it becomes the country’s worst aviation disaster. The compact crash site indicates the aircraft came down nose first and hit the ground in one piece. It also reveals the plane was flying away from the airport when it crashed, baffling investigators. A series of human errors are uncovered, leading to a call for improved communications training for pilots and updates to Medan Airport’s radar system.

On its final approach to Charlotte, North Carolina, US Air Flight 1016 is suddenly engulfed in rain so intense it obstructs the view from the cockpit. The pilots abort the landing to execute a go-around, but as they do, the aircraft crashes to Earth, hurtling along a road and breaking apart. Among the survivors are the pilots, who insist severe weather is to blame. For the investigators, the extreme rain is only part of the story. While evidence shows it was a microburst that upset the plane, the mystery remains: Why didn’t the crew simply fly out?

The dashcam of a passing car captures stunning footage of the final moments of a Taiwanese commuter aircraft as it banks steeply, clips an elevated highway and nosedives into the river. Investigators find no signs of pre-impact malfunction in either the plane’s flight control or hydraulic systems. The search becomes even more complex when they study the wreckage and find the blades of the right propeller engine feathered, suggesting it lost power during flight. But the more clues the investigators uncover, the greater the mystery: What caused the propeller to feather, and why did the plane bank violently to the left just before impact?

Additional episodes of season 11 of AIR DISASTERS are scheduled to premiere in early 2019.

What do you think? Have you seen Air Disasters? Will you watch the new season?

Looking forward to watching the new season of Air Disaster. With Kobe Bryant’s passing anniversary approaching, is there a chance, in the near future, to see an episode dedicated to him? Would love to see the detailed investigation.