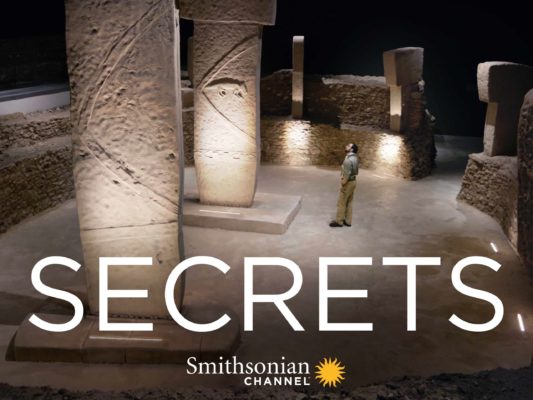 Smithsonian Channel has some new Secrets to reveal. Recently, the network announced the premiere for the TV show’s fifth season.

The docuseries “follows the world’s leading archaeologists as they use modern technologies to solve some of history’s oldest riddles.” The new season will explore a mysterious Viking tomb, the bible story “Jonah and the Whale,”  King Solomon’s mines, and more.

NEW YORK, August 16, 2018 – Archaeologists investigating a site in Iraq destroyed by ISIS have discovered a 2,700-year-old temple that reveals new insights into one of the Bible’s most famous stories, “Jonah and the Whale.” That’s just one of the revelations explored in the new season of Smithsonian Channel’s popular series SECRETS, which follows the world’s leading archaeologists as they use modern technologies to solve some of history’s oldest riddles. A mysterious tomb from the final days of the Vikings, a forgotten princess of Egypt and the true origin of King Solomon’s mines are among other startling finds revealed in season five of SECRETS, which premieres Monday, September 24 at 8 p.m. ET/PT on Smithsonian Channel.

JONAH AND THE WHALE kicks off the fifth season with a modern-day disaster. In war-torn Iraq, ISIS fighters in Iraq detonate explosives under the shrine of “Nebi Yunus” – the Tomb of Jonah – destroying a site sacred to three religions. But when ISIS flees, archaeologists discover that beneath the rubble lies a 2,700-year-old temple complex, an ancient Assyrian palace previously unknown to history. Dr. Katharyn Hanson is an archaeologist with the Smithsonian Institution’s Museum Conservation Institute. She was relieved to discover that ISIS’ destruction wasn’t complete: “The archaeological artifacts are still there,” she explains in the film. “That’s the part that gives me hope.” Massive sculptures, cryptic inscriptions and mysterious figures reveal the story of a cruel despot, a dark fertility cult and a character who may have inspired one of the Bible’s best-known tales.

Subsequent episodes of SECRETS are:

GRAVE OF THE VIKINGS

The 2012 discovery of a Viking tomb in suburban Denmark caught the archaeological world by surprise. Inside the vast underground chamber was a Viking lord’s weapons, his gold-encrusted jewelry and even the body of his horse … but no Viking. The empty grave unlocks the mysteries of the final days of the Age of the Vikings. Cutting-edge archaeology reveals how this war-like culture successfully competed with the finest armies of Europe. New revelations uncover the shocking force that caused the Viking Age to collapse and what made Viking corpses disappear from their tombs.

THE PHARAOH IN THE SUBURBS

In March 2017, construction work in Cairo’s urban outskirts is called to a halt, as the colossal stone head of an ancient pharaoh is uncovered by a forklift. The “Pharaoh in a Slum” makes international headlines, but the real news is that the massive statue represents a ruler lost to history. Researchers combine hieroglyphic research and ancient documents to put together the real story of this “Lost Pharaoh” who brought Egypt back from the brink of collapse and ushered in an artistic renaissance – before his name and memory were wiped out.

In 2011, archaeologists in the Valley of the Kings discover a sealed entrance to a previously undiscovered tomb – the first sealed tomb found in 100 years. Inside are the remains of a dismembered mummy, a pile of rubble and a coffin that is apparently 500 years younger than the tomb it resides in. Scientists identify the dismembered body as a female from the royal court who lived during the golden age of Egypt. Further investigation reveals a tale of ancient Egyptian grave robbing and desecration, as well the rise of the new elite that would eventually overthrow the Pharaohs.

BEASTS OF THE PHARAOHS

In the cemetery of Egypt’s earliest rulers, archaeologists were shocked to find the carefully buried corpses of baboons, jackals, leopards and even a hippopotamus. Forensic evidence shows these animals were not native to Egypt, and were captured at faraway locations. Why did these ancient Egyptians treat these animals like honored guests, even burying them with the royal family? New revelations show that this “world’s first zoo” may have been the foundation for the ancient Egyptian religion – and the source of Egypt’s mysterious animal-headed gods.

For centuries, scholars, adventurers, saints and thieves have searched for the wealthiest treasure mentioned in the Bible: King Solomon’s mines. Though scripture calls Solomon “richer than any other king,” ancient Israel seems to have no silver or gold mines that could explain the gold-covered Temple and palaces of Jerusalem. But startling new discoveries in the remote Israeli desert finally reveal the truth behind the legend: a long forgotten mine, an ancient metal-working encampment, and traces of a metal far more precious than gold.

What do you think? Have you seen Secrets? Will you watch the new season?