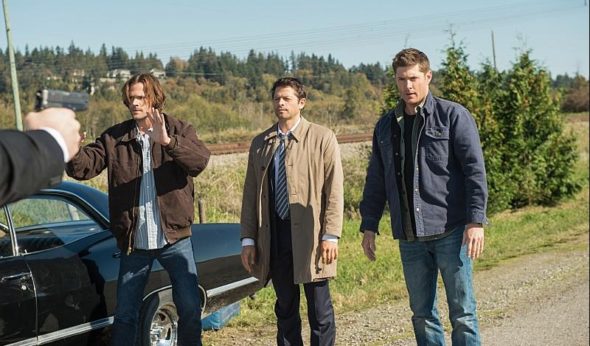 What’s next for Supernatural? Recently, CW boss Mark Pedowitz discussed his plans for the future of the long-running TV show, The Wrap reports.

Supernatural debuts its 14th season on The CW on October 11th at 8 p.m. ET/PT. But will there be any spin-offs? During this summer’s TCA press conference, The CW boss Mark Pedowitz said he’s open to another Supernatural series but the network has already passed on two — Wayward Sisters and Supernatural: Bloodlines:

If it’s a good idea and they want to go forward with [it], we’re open to listen. It is a great franchise. I am concerned, to be quite candid with your question, ‘Supernatural’ may be Jared and Jensen — and there may not be a franchise beyond that.”

What do you think? Do you watch Supernatural? Would you watch a spin-off series?

Everyone knows Supernatural could do 20 seasons easy. Take a break and return. Jerid s action of starting Walker Texas Ranger contradicts his reasons for closing Supernatural. He said he needed family time. While everyone is alive and kicking.Keep it going.

There are many of us who are still watching Supernatural and would love it if you gave Wayward Sisters one season to prove itself, not just one show within Supernatural.

Please do a spin off, I would definitely watch. I heard a rumor bout wayward sisters and was excited. Sorry to hear was shot down.

Maybe the first couple of episodes, but if it doesn’t grab me right away I won’t stay with it. I don’t see how anything could compare to all the actors on screen chemistry even bad guys. Was sad to see Mark Shepard go, but ppl do move on. They were going to try the spin off with the women called Wayward Girls. I wouldn’t have watched it & they didn’t do it anyway. No one would even pick up the pilot.

Yes I would watch a spin off if the idea was a good one. Personally, I wouldn’t mind a spin off with Rowena, Jack, and Castile fighting evil and maybe even with a few of the hunters that have been on the show a long time. If they did something like that I would like to see Rowena’s son (lucifer, the original actor) in the mix against the Evil current Lucifer. This group have a love/hate relationship with each other, Rowena lends a comedic aspect to the show as did the original Lucifer as well as some sarcasm at times.… Read more »

I meant women hunters being added to the spin off idea I wrote about.

Would consider watching a good product.
But most are pale imatations.

I think Wayward Sisters would have been a great spinoff and I would have definitely watched. Bloodlines, not so much. I would watch a spinoff if it was good.

I think if Alexander Calvert’s role of Jack were to spin-off that you’d have an entire new age group interested in the spin-off and a huge following! You’d have to give him back his full powers again and possibly move him into an angel/demon setting with humans as well. Perhaps he could go to another dimension which has many similarities to our world but possibly one where Dean and Sam’s mother never died so they never became hunters, so the world would be much worse because it didn’t have them to save them. This would allow some of the fan… Read more »

I am not so sure about trying out another Spin-off….but I hope they continue for a few more Season with Supernatural 🙂

Supernatural is my favorite show on tv. I am 61 and have been a fan of the show as well as the boys. I would love a spin off, the wayward girls to me seemed to be more for the adolescent audience, what I enjoyed with supernatural was the lore behind the monsters I would actually look up the names like leviathans, the names of the angels etc. and I would find the true lore so cool. Jack could also of been added to the show to assist the girls. Of of course the boys if you don’t kill them… Read more »

Supernatural is my favorite series that is on CW and I would watch spinoffs of the show I have not missed and season’s. It is a great series Jared and Jenson keeps it interesting.

My husband and I watch Supernatural every week and have for 13 years! As for a spin off. We would probably watch it over most of the nonsense you have on there now – all super people or teenagers in Riverwood or whatever the name. But not about the women – Wayward Women? NO! I love Dean and Sam, Cass and even the wonderful Mark Pellegrino as Lucifer. Losing Bobby was not good! Those four MAKE THE SHOW! You COULD possibly spin off Crowley and Rowina. They truly are wonderful and wonderful together! I would definitely watch that! Don’t understand… Read more »

I had a similar thought, especially about Rowena and Crowly (only if the same actress and actor), but added Jack, Castiel, and two or three of the hunters who have been on the show for many seasons. I liked Bobby a lot.

Good idea The Crowley Chronicles love it, but since Mark Shephard left on his own he probably wouldn’t want to.

Totally hooked on Supernatural, don’t believe I would watch a spinoff. I haven’t missed a season.

Wayward Sisters would have been good, but they needed more attractive women than the actresses they were working with. If they would have kept mother & daughter, Ellen (Samantha Ferris) and Jo (Alona Tal), around for a spin-off, they would have succeeded. They were awesome in every way!

They should really work on trying to pick up Wayward Sisters. Both JA and JP have expressed that they were all for it and the fans are still fighting for it.