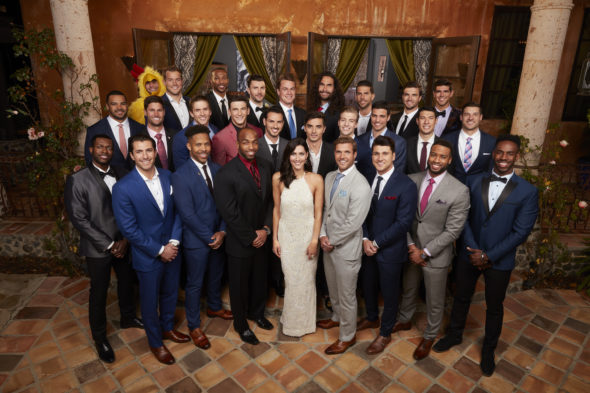 Are you ready for the new season of The Bachelorette? ABC has just released new details for the TV show’s upcoming 14th season.

This season will see the new bachelorette, Becca Kufrin, pick one suitor from a group of 28 men. Season 14 premieres on ABC on May 28th at 8 p.m. ET/PT.

Read more details below about the new season of The Bachelorette, including Becca’s suitors:

What do a fashion aficionado whose over-the-top confidence led him to the competitive world of male modeling, a nine-year NFL veteran who is a big teddy bear despite his gruff exterior, an outdoorsman who likes to take things slow, a former professional football-player-turned-philanthropist who has a secret that could end his chances of getting the final rose and the dashing gent who pulled out all the stops when he first met the Bachelorette all have in common? They’re all on the hunt for Becca Kufrin when the 14th edition of ABC’s popular romance reality series, “The Bachelorette,” premieres on MONDAY, MAY 28 (8:00–10:01 p.m. EDT), on The ABC Television Network, streaming and on demand.

A luminous, enthusiastic Bachelorette braces herself for the experience of a lifetime and the possibility of finding her Prince Charming. The Bachelorette follows her best instincts in choosing who should get her first impression rose, but which 21 men remain to move into the mansion and continue the race for Becca’s heart?

This season, romantic and adventurous dates will test the men’s perseverance in pursuing their romantic objective, along with fun, exciting and exotic dates that will elicit real and raw passions.  Eight lucky men get dressed up in tuxes for a contest testing their “groom-ability” as Bachelorette Rachel Lindsay and Bryan Abasolo officiate. Lil Jon performs one of his hits, as Becca and one man seek to exorcise Arie from her life with a cathartic exercise together. A chaotic game of dodgeball on trampolines explodes as comedian Fred Willard joins Chris Harrison for the play by play. Becca’s friends Tia, Seinne, Bekah M., Caroline and Kendall are the recipients of spa day services from a group of the bachelors. A trip to Capitol Records and a songwriting session with hit singer/songwriter Richard Marx awaits Becca and one excited bachelor. Ten men run football drills with stars from the professional women’s Lingerie Football League, then display their fierce form in a game of their own with former NFL star Keyshawn Johnson with Chris doing the commentary.

Becca and her remaining bachelors hit the road to Park City, Utah, where she and one of the suitors join 2006 Olympic bobsled silver medalists Valerie Fleming and Shauna Rohbock for an exhilarating ride down the twisty iced track and then cap off the evening with a private concert by country superstar Granger Smith. The legendary singer/songwriter Mr. Las Vegas Wayne Newton and his wife host a group of the men at their glamorous mansion for a lesson on how to serenade Becca and where they then learn they need to perform in front of a live audience. Historic Richmond, Virginia, is the backdrop for an entertaining debate between some of the men on the steps of the Virginia state capitol. Australian country superstar Morgan Evans provides the musical background for an intimate moment between Becca and one of the men. The clear blue waters of Nassau in The Bahamas invite Becca and her group of bachelors to enjoy romantic adventures. The Baja Men perform for the Bachelorette and one of her suitors for an outrageously fun time. However, serious decisions await Becca on which four men’s families she will meet. Then, the final three men journey to exotic Chiang Mai, Thailand, for intimate overnight dates. Will the future hold a Cinderella ending for the Bachelorette?

Hosted by Chris Harrison, “The Bachelorette” is a production of Next Entertainment in association with Warner Horizon Unscripted & Alternative Television. Mike Fleiss, Elan Gale, Bennett Graebner and Nicole Woods are the executive producers. “The Bachelorette” is broadcast in 720 Progressive (720P), ABC’s selected HDTV format, with 5.1 stereo surround sound. This episode carries a TV-PG, L parental guideline.

What do you think? Are you a fan of The Bachelorette? Will you watch the new season?

omg here we go again. swapping spit with more people than I like to think of. Not crazy for her. more drama !!!!!

I tape so I’m able to zip through slow…dragged on repeated parts. But I still enjoy!

Haven’t watched this mess in years. I can’t believe the amount of time ABC devotes to it.

I wish this show was cancelled.