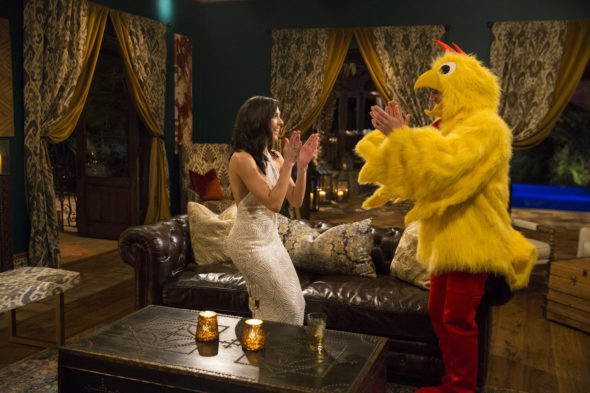 Is the final rose really final? Has The Bachelorette TV show been cancelled or renewed for a 15th season on ABC? The television vulture is watching all the latest cancellation and renewal news, so this page is the place to track the status of The Bachelorette, season 15. Bookmark it, or subscribe for the latest updates. Remember, the television vulture is watching your shows. Are you?

An ABC “reality” dating competition, in season 14, The Bachelorette follows Becca Kufrin — an alumna of the Arie Luyendyk, Jr. season of The Bachelor — on her quest for true love. Fans will remember Arie rescinded his proposal to this Minnesotan on live TV, for the love of runner-up Lauren Burnham. This time out, Becca and host Chris Harrison will welcome celebrity guests including: Lil John, Fred Willard, Richard Marx, Wayne Newton, Morgan Evans, and Keyshawn Johnson, as well as notable franchise alumni, like Rachel Lindsay. Locations include Park City, Utah; Richmond, Virginia; Nassau, in The Bahamas; and Chiang Mai, Thailand, as well as the traditional “hometown” dates.

The 14th season of The Bachelorette averaged a 1.45 rating in the 18-49 demographic and 5.79 million viewers. Compared to season 13, that’s down by 9% and 2%, respectively. Find out how The Bachelorette stacks up against other ABC TV shows.

Will ABC cancel or renew The Bachelorette for season 15? Unless the ratings really tank, I’m sure it will be renewed. I’ll update this page with breaking developments. Subscribe for free alerts on The Bachelorette cancellation or renewal news.

What do you think? Are you glad that The Bachelorette TV show has been renewed for season 15? How would you feel if ABC had cancelled this TV series, instead?

The Bachelorette and the Bachelor needs to go to the cancel pile. Been on too long, so Stupid for people with any brains. Not even fun when you want to watch a mindless show. It has not mind, character, dumb reeality.

Cancel, it is only garbage.

IT IS entertainment . I watch sometimes, but really it is repetitious. What bothers me the most, is how they go from one to another and swap spit it is disgusting !!!!

It used to be fun to watch. However lately it has become gross and disguisting. Where Is the pride of these people.

I hope it gets cancelled. I don’t like the bachelorette and bachelor, it is getting old. No couples work out.