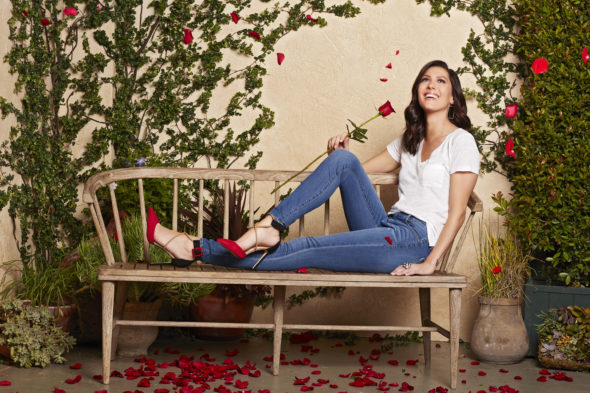 Is everything coming up roses during the 14th season of The Bachelorette TV show on ABC? As we all know, the Nielsen ratings typically play a big role in determining whether a TV show like The Bachelorette is cancelled or renewed for season 15. Unfortunately, most of us do not live in Nielsen households. Because many viewers feel frustration when their viewing habits and opinions aren’t considered, we’d like to offer you the chance to rate all of The Bachelorette season 14 episodes here. *Status update below.

An ABC dating reality TV series, in season 14, The Bachelorette follows Becca Kufrin — an alumna of the Arie Luyendyk, Jr. season of The Bachelor — on her quest for true love. Fans will remember Arie rescinded his proposal to this Minnesotan on live TV, for the love of runner-up Lauren Burnham. This time out, Becca and host Chris Harrison will welcome celebrity guests including Lil John, Fred Willard, Richard Marx, Wayne Newton, Morgan Evans, and Keyshawn Johnson, as well as notable franchise alumni, like Rachel Lindsay. Locations include Park City, Utah; Richmond, Virginia; Nassau, in The Bahamas; and Chiang Mai, Thailand, as well as the traditional “hometown” dates.

What do you think? Which season 14 episodes of The Bachelorette TV series do you rate as wonderful, terrible, or somewhere between? Should ABC cancel or renew The Bachelorette for a 15th season? Don’t forget to vote, and share your thoughts, below.

This is just about the worse show on all of TV. I believe it should be cancelled.