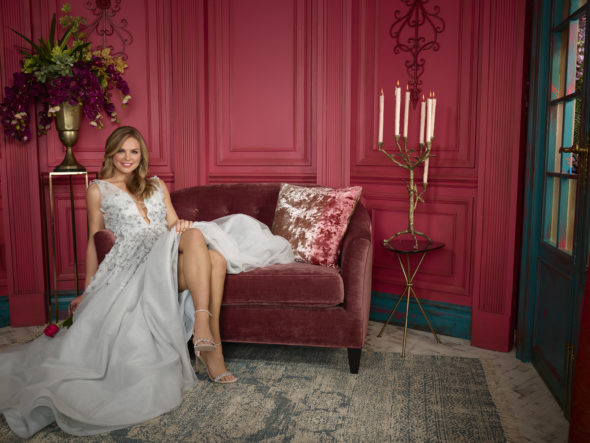 Would you give a rose to the 15th season of The Bachelorette TV show on ABC? As we all know, the Nielsen ratings typically play a big role in determining whether a TV show like The Bachelorette is cancelled or renewed for season 16. Unfortunately, most of us do not live in Nielsen households. Because many viewers feel frustration when their viewing habits and opinions aren’t considered, we’d like to offer you the chance to rate all of the season 15 episodes of The Bachelorette here. *Status update below.

An ABC dating reality TV series, in season 15, The Bachelorette follows former Miss Alabama USA Hannah Brown — an alumna of the most recent season of The Bachelor, featuring Colton Underwood. Fans will remember Colton ended their relationship the night Hannah met his family. This time out, Hannah and host Chris Harrison will welcome guests including celebrity couple Jason Biggs and Jenny Mollen, Boston Celtics’ Jaylen Brown and Terry Rozier, runway coach Miss J. Alexander, and drag queens Alyssa Edwards and Alaska. The 15th cycle will also feature performances by Lukas Graham and Jake Owen, and will visit locations including Scotland, the Netherlands, Latvia, and Greece, as well as the traditional “hometown” dates.

What do you think? Which season 15 episodes of The Bachelorette TV series do you rate as wonderful, terrible, or somewhere between? Should ABC cancel or renew The Bachelorette for a 16th season? Don’t forget to vote, and share your thoughts, below.

Please stop these shows/ man & women Bachelor & Bachelorette, they are degrading & just promoting sex-on tv . If you can’t find a life partner without going on tv & embarrassing yourself you should re-think your life as a whole. The network should come up with something a “family” can watch…they get paid the big$$$. These shows are crass and insulting.

I love this show but I hate Hannah! She’s a terrible bachelorette! I knew this season was going to be a disaster from the moment they announced Hannah was the bachelorette. Hopefully next season they will pick someone better

Please cancel this stupid show you may think people like. But they are sick off it.

6/17/19 was the worst episode in Bachelorette history. The drama is redundant and boring. The constant recapping was annoying. Get back to showing us the beautiful countries.

Hanna is so fake. The show should cancel.

These shows are so fake, and I can’t believe anyone buys into these shows. “Reality” shows that have no talent associated with them have no redeeming value. More dumbing down of our society. Shows just for entertainment TV is one thing, but shows that claim to be “reality,” really??? And people are buying into this “reality” junk. These shows are no different than the prince/princess shows that young children watch and then think they will come true, only these shows are for adults who should know better, but think they will still find a prince/princess. Relationships take work, not giving… Read more »

Please take Bachelor and Bachelorette off the air!! I can’t stand the made up fake drama and the hard up people that fight for some man/ women that they don’t even know!! What kind of losers are these people? Why don’t they go out on a Friday or Saturday night and go downtown to “WHISKEY ROW” or their main st full of bars and get cell numbers from 20 women/man and pick one? Same thing!! God I can’t stand this show!!