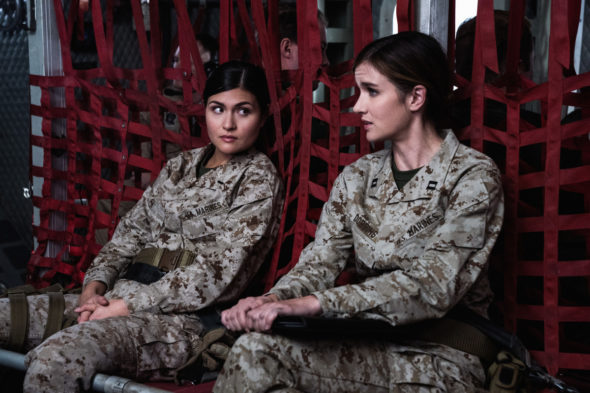 Love the show- hope you will keep it!

Love this show! Cast is fantastic!

I like the Code very much! Please don’t cancel it. I have watched and enjoyed it from the beginning!

The code is going to be back july 1st. You might want to add that to your page. They pulled it for the month cause of sports finals.

We love the show. Please bring back!!!

I like the show and believe the characters are developing; however, there needs to be an expert military advisor on set. There are some errors that are obvious to anyone familiar with Marine and Navel Officers. Officers only wear wear v-neck undershirts and especially Marine Officers have strict weight guild lines and are never pudgy. These are glaring errors to the trained eye.

l especially like the character, Harper Lee and look forward to an imminent breakup with her civilian fiancé

We loved The Code please bring it back

I LOVED the code. I and hoping they give it another chance.

If at all possible, please leave The Code on your schedule for Season 2!! My husband and I have really enjoyed this show!! We don’t really care for reality shows! The writing and actors on The Code are really good!! Thank you!!

I am not surprised they are considering cancelling ” The Code “, it is a great show but that doesn’t matter these days, if it doesn”t have sex, excessive violence or some stupid reality premise it gets cancelled. Sometimes I wonder why I even have a t.v. anymore.

Please do not cancel THE CODE. I think that is a very great show. I love shows that have lawyers in it and I like soldier movies. I feel it is the perfect fit. Our guys who fight for our freedom deserves to have shows that represent them. My father was in WWII. All i know is very little about they had to go through. This show is great and helps people to understand what some of the things they went through. PLEASE DO NOT cancel the show. I look forward to seeing THE CODE each and every week. Thank… Read more »

The Code needs to be renewed. It is well written and acted and shows a moral code!!
I think the show will gain viewers if given some time.

The show has great story lines, however, all of us prior or current military cringe when we see all the uniform, haircut, and formalities beeing over looked. The program The Seal Team were trained by actual Special Forces teams. I believe it was said they were even exposed to some boot camp experiences. Whoever is your military advisor is not getting the job done correctly or even close. I would like to see your program continue as your actors do an excellent job. I just saw the episode Above the Knee. The actress Harper did an excellent job in this… Read more »