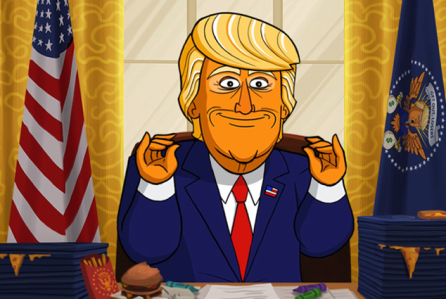 Showtime has a leader for their new Donald Trump series. Deadline reports RJ Fried has been named the showrunner for the network’s upcoming TV show Trump White House.

From executive producer Stephen Colbert, the animated series “will present the truish adventures of Trump’s confidants and bon vivants – family, top associates, heads of government, golf pros and anyone else straying into his orbit – intrepidly exploring their histories and their psyches, revealing insights into what makes them so definitively Trumpian.”

Fried has previously worked on The Late Show with David Letterman, Rob & Big, and was most recently the head writer and co-executive producer for Problematic with Moshe Kasher. Trump White House is slated to debut on Showtime in early 2018.

What do you think? Are you a fan of political comedies? Will you watch Trump White House?

Talk about deplorable. Colbert is the worst.

With all the hate in the USA these days it needs this? People going to wake up and see colbert is just creating more and more hate in this world. Its not funny nor is it a sample of what american people believe in. Its sad when people liike colbert uses the people to get his rating up. Creating a vision of hate isnt what the usa is buildt on. If you dont like something VOTE………….write letters to Washington. What the people do today is cry and complain.Without getting the right answers it sad they believe is their bais answer.