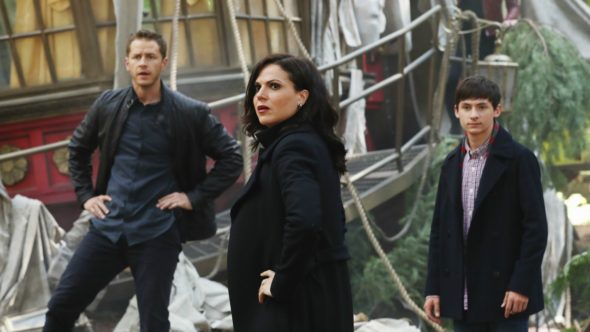 Is Once Upon a Time ending for good? Today, ABC announced they’ll air a special retrospective with the cast and creators before the TV show’s upcoming season six finale.

It’s unclear if ABC will renew Once Upon a Time for a seventh season or not. Earlier, we reported several of the cast members were negotiating new contracts for season seven, but some of the stars were noticeably absent from the list, including leads Ginnifer Goodwin and Josh Dallas. Additionally, EPs Edward Kitsis and Adam Horowitz have revealed that if there is a seventh season, the show will be retooled.

The retrospective special, Once Upon a Time: The Final Battle Begins, debuts on ABC on May 14th at 7 p.m. ET/PT. The two-hour season six finale will premiere after at 8 p.m. ET/PT.

Once Upon a Time: The Final Battle Begins” – Join our talented cast and executive producers as they identify some of their favorite moments over the past six seasons, as well as take a look back at their characters’ journeys. They will discuss what the show has meant to them personally and to the millions of fans who made “Once Upon a Time” a hit show on ABC. Additionally in this special, “Oncers” get to ask the cast and producers their most burning questions about the series. Take a look back at the origins, the love and romance, and all the adventures along that way that fans have cherished these past six seasons on SUNDAY, MAY 14 (7:00-8:00 p.m. EDT). Afterwards, stay tuned for the epic two-hour season finale, as the final battle has arrived, on “Once Upon a Time,” (8:00-10:00 p.m. EDT), on The ABC Television Network.

What do you think? Are you a fan of Once Upon a Time? Do you want a seventh season?

The way UOAT ended in the season finale was perfect. The story lines were concluded and we came full circle to a daughter looking for Henry, just like he came looking for Emma many years earlier. From what I have read the new season would have nothing in common with the show we know. Only a few characters would remain (Hook, Gold, and Regina), Emma, Snow, Charming, and most other characters would be gone. As much as I love UOAT and hate to see if go, I am not sure how to feel about that much change. It would be… Read more »

Yes!! I’d love to have a season 7! Please continue!! This is such an amazing Cast… FAMILY. The writers of this series have done such a fantastic job! They do amazing work in developing the characters and stories. And the actors… wow… how can I express how awesome they have been in portraying the characters written?! Please don’t cancel the show.

Please, please, please do NO T cancel Once Upon A Time! In my opinion, it is the BEST SHOW that is on television today! It’s certainly the best show I ever watched! Once Upon A Time has everything that an awesome show should have – action, fantasy, drama, love, hate, mystery, romance, unexpected plot twists, amazing characters, excellent actors and actresses, gorgeous costumes, beautiful sets, everything! At it’s core, Once Upon A Time is not about fairy tale characters; it’s about love and redemption, but mainly, Once Upon A Time is about hope. Hope for a better future. Hope that… Read more »

PLEASE PLEASE PLEASE PLEASE CONTINUE #OUAT!!!!! I ABSOLUTELY ❤️LOVE THIS SHOW!!! YOU CAN ASK ANY ONE I KNOW AND THEY WILL TELL YOU I AM A WATCHER. I WATCH SHOWS 24/7 AND THIS IS ONE OF THE SHOWS I LOOK FORWARD TO THE MOST!!!!! THIS IS SHOW AMAZING. IT HAS EVERYTHING THAT IS NEEDED TO BE A GOOD SHOW. DRAMA, FANTASY, MYSTERY,DRAMA, ROMANCE THIS SHOW HAS IT ALLLLL!!!! ONCE IS LIKE A ROLLER COASTER THAT SHOULD NEVER EVER END. THIS SHOW MAKES PEOPLE SMILE ALL OVER THE WORLD IF YOU TAKE AWAY THIS SHOW YOU TAKE AWAY THEIR SMILE!!! #CONTINUEOUAT

please dont take once upon a time off the air. I am a big fan of this show for me it show we can change our ways to get a happy life especially when we do bad things.

Yes!!! I love the show. The special effects and story has made all of us a believer. Please keep this show on! Not many shows I watch….this is #1 for me.

Why cancel everything and never put anything good to replace. I’m a huge fan of Once Upon A Time.

Please don’t cancel. There is more to tell.

Please renew Once, it makes me so so happy and gives me something to look forward to every week, please ABC, give us a season 7. I need these characters in my life every week

I’d never stop crying if OUAT doesn’t get a 7th season. This show means so much to me