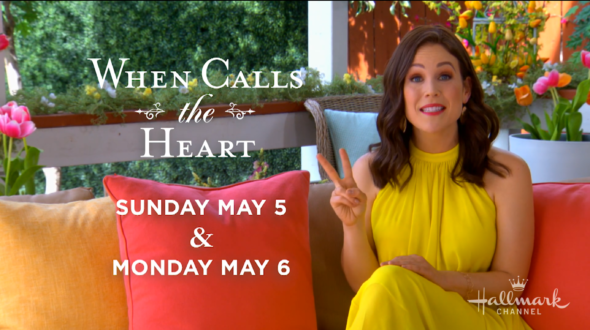 Get ready to return to Hope Valley. Hallmark Channel has announced that season six of their When Calls the Heart TV show will return on Sunday, May 5th at 8 p.m. and a second episode will air the following evening, on Monday, May 6th.

Season six of the series was pulled from the schedule following co-star Lori Loughlin’s arrest so that the remaining new episodes could be “retooled” (to edit Loughlin out).

Here’s the press release and a preview of the return:

Buoyed by a legion of devoted fans, the sixth season’s first episode was the highest-rated premiere in the series’ history, ranking as the #2 original scripted series of the week, only behind AMC’s “The Walking Dead”, and marks the #3 original scripted series on cable in 2019-to-date. On a Live +3 basis, the program delivered a 2.9 Household rating, 3.1 million Total Viewers, and 449,000 Women 25-54. The episode reached over 3.6 million unduplicated total viewers.

What do you think? Will you be watching the return of When Calls the Heart on Hallmark? Do you think that Loughlin should have been edited out of these episodes?

I think the show should continue. The storyline will need to be changed but there is still other characters and the show is not just based on one. It is Sad what has happened as Lori is a wonderful actress but other cast members need to make a living as well so they should not lose their jobs. We are all human and make mistakes some more powerful than others but we will live by our actions. I wish everyone well and looking forward to future shows and a continued Season of When Calls the Heart.

She hasn’t been convicted of anything yet, very SAD that Hallmark can judge people. Since they have already fired her, they should replace her. Do NOT cut her out of the show.

Yes I think it needs to keep airing. What I don’t understand is that Hallmark portrays love and family on all their TV programs and Movies, but, you can’t stand behind Lori when she makes a mistake. Yes, what she did was wrong, BUT, have none of you made mistakes. Have you ever thought she and her family now feel cut off from the family that said they loved her. I could see you docking or cutting her pay, but, totally turning your back on her, that’s not the way you treat family. I personally think your network and the… Read more »