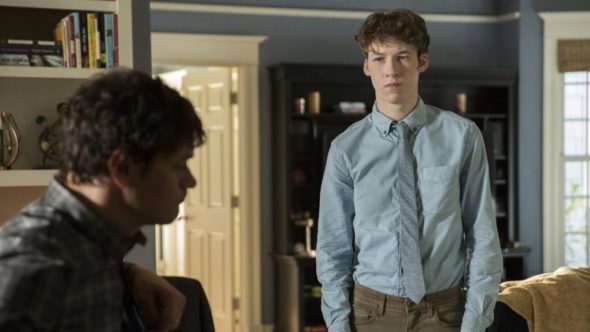 It’s a day of mixed feelings for fans of 13 Reasons Why. The Netflix TV show has been officially renewed for a fourth and final season. Production on season four is currently underway and will feature the core cast’s graduation from Liberty High.

In addition, the streaming service has revealed that season three (13 episodes) will debut on Friday, August 23rd. It picks up eight months after the conclusion of season two. Here’s the third season premiere announcement, as well as a video teaser:

Eight months after preventing Tyler from committing an unthinkable act at Spring Fling, Clay, Tony, Jessica, Alex, Justin, and Zach find ways to shoulder the burden of the cover-up together while helping Tyler move toward recovery. But when the aftermath of a tumultuous Homecoming game culminates in the disappearance of a football player, and Clay finds himself under police scrutiny, it’s up to a shrewd outsider to steer the group through an investigation that threatens to lay bare everyone’s deepest secrets. The stakes are raised in this riveting third season of 13 Reasons Why, as the consequences of even the most well-intended actions can alter a life forever.

What do you think? Will you be watching season three of 13 Reasons Why on Netflix? Do you think that the series ending with season four is a good idea or, would you have potentially watched season five?

I would watch a fifth season for sure. People need to see this. Yes it’s dark. Yes it’s hard to watch. But it’s real! These things are happening so many young people committing suicide. Whether they are being bullied or any other reason. The fact is it’s happening. Social media can be very dangerous. 8 yr old girl killed her self because of bullies. Schools are not on top of things. Kids are bullied and beaten up kids are being raped and kids are being killed for being gay. This show need a to go on to address the issues… Read more »

I’ve watched with my now 16 y/o granddaughter. Seeing where Season 3 is going makes me afraid for all 3 of my high school age grandkids. This is such a toxic environment. Will there be a group confession in either of the last two seasons? I hope that Season 4 taking these young folks to graduation ends with at least some enlightened good things.