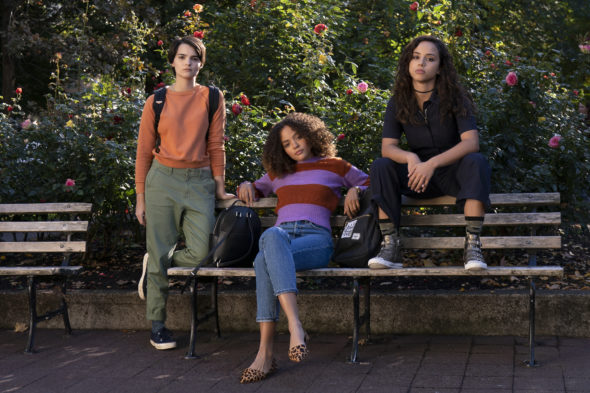 TV show description:
From creators Amy Andelson, Emily Meyer, and Kirsten Smith, the Trinkets TV show is a half-hour teen drama based on Smith’s 2014 young adult novel of the same name. The series centers on three very different high school girls who wind up bonding over the one thing they seem to have in common — shoplifting.

Elodie Davis (Hildebrand) is the new girl in town — having recently moved to Portland from Albuquerque. If that wasn’t hard enough, she is also something of a misfit — one who is grieving the death of her mother. After being pretty roundly rejected at a party, she goes shopping to lift her spirits. As she’s stuffing the purloined goods into her jacket, she’s caught by a security guard. As a result, the court orders her to attend Shoplifters Anonymous meetings.

At the meeting, she spots Moe Truax (Madeira), her new school’s resident tough chick, who promptly tosses Elodie a crumpled up note that reads, “Die.” Before she reacts, their class’s beauty queen — Tabitha Foster (Swindell) also slips into the meeting. Soon the facilitator calls on Elodie to share her story. After the meeting, she’s approached by a cute guy named Luka Novak (Zaga). While she’s talking to him, Moe and Tabitha wander over Tabitha makes it clear that “this” never happened.

After the meeting the three girls run into each other at a department store. Moe proposes a challenge: whoever swipes the best from the store in a half an hour gets to keep everyone’s take. Tabitha and Moe used to be friends when they were little and there’s still some tension between them. Elodie winds up on the receiving end of some of it, but she also wins their contest.

Back at her father and stepmother’s house, Elodie stores her newly lifted necklace in the suitcase under her bed where she keeps all her ill-gotten gains. Almost catching her, her dad Doug (Sullivan) tries to reach her and make her feel more at home in his house, but she clearly isn’t ready to let down her walls.

Elodie isn’t the only one in pain. All three of these girls are struggling through some hard stuff. Despite the odd way in which it formed, as their bond grows, they start to help one another through their tough times.


What do you think? Do you like Trinkets TV series? Should this Netflix TV show be ending or renewed for a third season?

This show is just Excellent. The reality of teens testing out their limits is really an honest portrayal of what you get if you shoplift. Very impressed with the Spot on Lake Oswego Taste and egos. I grew up there and it is fun to watch this show. Hope it lasts many seasons as it is very addictive!

I love the show trinkets I hope it gets renewed I watched it all in one day. I love the strong female characters and even stronger bonds