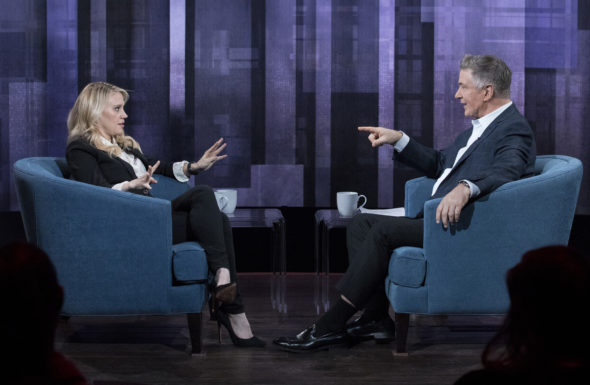 Who will close out the weekend for you? Has The Alec Baldwin Show TV show been cancelled or renewed for a second season on ABC? The television vulture is watching all the latest cancellation and renewal news, so this page is the place to track the status of The Alec Baldwin Show, season two. Bookmark it, or subscribe for the latest updates. Remember, the television vulture is watching your shows. Are you?

Will ABC cancel or renew The Alec Baldwin Show for season two? The show is drawing very low numbers so I don’t see much of a future for this talk series, especially since the network has sent it to Saturday nights. I’ll update this page with breaking developments. Subscribe for free alerts on The Alec Baldwin Show cancellation or renewal news.

What do you think? Were you hoping that The Alec Baldwin Show would be renewed for season two? Are you sorry that ABC cancelled this TV series, instead?

People don’t like the talk show because of Alex’s SNL character? Two very different things. It’s hip and he seems to be a very good interviewer. It’s about the guests, not his SNL character. I love the graphic artist. It’s very NY-ish. Red middle America is that ridged?

When you alienate half of your audience – usually the ones that spend money, and you do it with others that have alienated the same people – you set yourself up for failure.

I like the show. see nothing wrong. good interviews

I think he does a great job and I like the show!

I will not be watching!!!

I would not again. Terrible show!