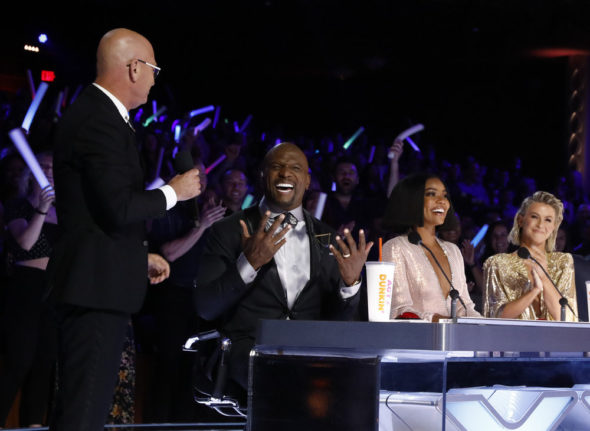 America’s Got Talent is shaking things up on its judging panel for a second season in a row. It has been revealed that two of the judges won’t be on the panel when the series returns this summer.

Per Deadline, those judges are Gabrielle Union and Julianne Hough. Both joined the series for season 14. Simon Cowell and Howie Mandel will return to the judge season 15 this summer.

A renewal for season 15 of America’s Got Talent has not been officially announced yet, but the reality competition series is one of the most popular series on television. Season 14 of the NBC series averaged approximately 9 million viewers.

It is not yet known who will replace Hough and Union on the panel this summer. It is possible that fans could see Alesha Dixon and Heidi Klum take the two seats. The ladies are sitting on the judging panel for America’s Got Talent: The Champions for season two. That season premieres on NBC in January.

What do you think? Did you like having Gabrielle Union and Julianne Hough on the judging panel of America’s Got Talent? Will you miss seeing them on the show this summer?

Didn’t really care for either of them. Let’s see who will take over for them.

I think they were both great judges, way better than Mel & Heidi who did it for so many years. It’s absurd that they’re changing the judges after only 1 season. From everything I’ve been reading about Gabrielle Union, it seems like NBC is up to no good with that decision.

I’m also worried about who’s going to take their places now that Gabrielle and Hough are leaving. Ik one person from Britain’s Got Talent that’s taking one of their spots. Her name’s Alesha Dixon.

No. I loved them especially Gabrielle Union. She’s so beautiful and Dwyane Wade is lucky to have her as his wife.

They are both fine ladies but I felt they were out of their depth on this show. Bring back Heidi along with anyone, other than Mel B.

As long as Mel. B doesn’t return I’m fine with both those ladies, but I liked to see Heidi Klum return. She’s my favorite!

I really enjoyed them and sorry to see them go, maybe the show needs to go even though I had really looked forward to it in the past

I am watching AMG no matter what! Never miss a single episode! Cannot wait 🙂

They could drop Terry Whoever also from being the host or whatever you want to call the job.

I missed most of last season, but didn’t care of two new judges

Gabrielle was great. Julianne Hough is just weird. She comes off very fake.

Sheri B
Reply to  Cynthia McIlrath

Agree with Hough but not Union. They both were fake you me.

I kept chalking up her being “odd” because she’s going thru IVF for infertility.. ‍♀️

They did not even get them a year

I will NOT miss Julianne and Gabriel. Bring back Heidi and Mel B.