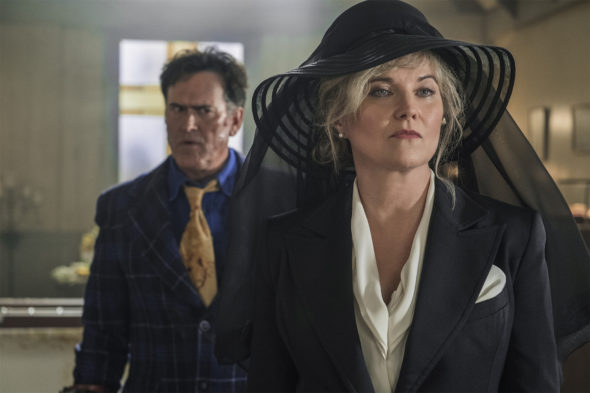 Does Ash Williams keep the Evil Dead at bay during the third season of the Ash Vs Evil Dead TV show on Starz? As we all know, the Nielsen ratings typically play a big role in determining whether a TV show like Ash Vs Evil Dead is cancelled or renewed for season four. Unfortunately, most of us do not live in Nielsen households. Because many viewers feel frustration when their viewing habits and opinions aren’t considered, we’d like to offer you the chance to rate all of the Ash Vs Evil Dead season three episodes here.

What do you think? Which season three episodes of the Ash Vs Evil Dead TV series do you rate as wonderful, terrible, or somewhere between? Should Starz cancel or renew Ash Vs Evil Dead for a fourth season? Don’t forget to vote, and share your thoughts, below.

Don’t you know ? They cancel all the good shows people watch and the shows I wouldn’t let a dead dog watch lasts for ever.

Please don’t cancel Ash versus evil would like to show ever since it started from the Evil Dead up to now. Hope to see more of Bruce and the coming episodes

Gr8 follow-up to Seasons 1 & 2. Bruce Campbell can take on the dead and make us smile and definitely uplift our spirits and create the laughter we need to weather our current state of depression caused by the madmen running the world today.

I just signed up for Starz, as soon I found out season 3 had already put out 7 episodes. Ash vs Evil dead doesn’t miss a beat, though some of the more outrageous scenes have toned down a bit gross factor.