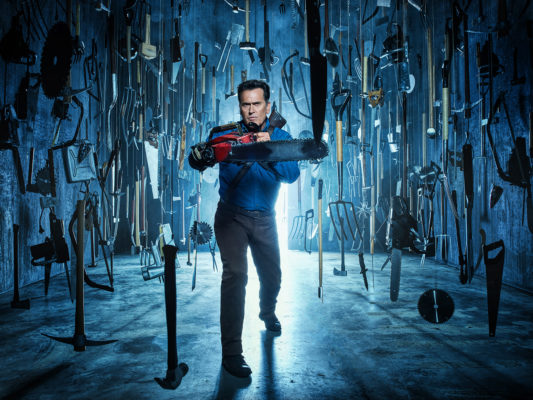 Are you still sad about Ash Vs Evil Dead‘s cancellation? Recently, star Bruce Campbell spoke with Rolling Stone about the end of the Starz TV show.

As reported earlier, Starz has cancelled the horror comedy after three seasons. The series is based on the Evil Dead movie franchise and follows Ash (Campbell) as he fights off another demon invasion. The cast also includes Lucy Lawless, Ray Santiago, Dana DeLorenzo, and Jill Marie Jones.

In the interview, Campbell revealed he’s satisfied with the way Ash Vs Evil Dead ended:

God bless Starz, because they let us mostly do what we wanted to do. That’s unrated TV with zero censorship, and that’s what fans needed. We had a little bit of suspicion that our third season might be our last, so we wanted to make sure we gave it a good, snap-bang ending. All these Evil Dead movies are really difficult. I’m 60, and I think I should be doing, like, Shakespeare in the Park, drawing-room comedies and dinner theater now. It’s just not practical anymore.”

What do you think? Are you a fan of Ash Vs Evil Dead? Would you have watched a fourth season?

Love it! Shame itself going away. Nice job Bruce Campbell and rest of team!