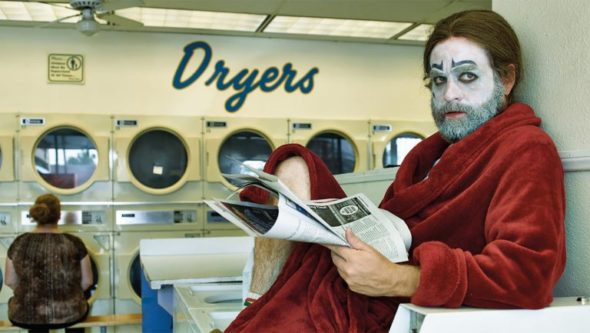 FX is done clowning around. The cable channel has announced that the Baskets TV show is ending with the current batch of episodes so, there won’t be a fifth season.

A black comedy series, Baskets stars Zach Galifianakis, Louie Anderson, and Martha Kelly, with Alex Morris recurring. The surreal series centers on rodeo clown Chip Baskets (Galifianakis), his twin, Dale (Galifianakis), and mother Christine (Anderson). In season four, Chip decides it is high time to move out, but has a hard time adapting, despite the help of Martha (Kelly) and a life coach.

LOS ANGELES, July 31, 2019 — FX Networks today announced that its critically acclaimed comedy series Baskets will come to an end with the show’s season four finale on Thursday, August 22 on FX.

“Over four seasons, Baskets has taken its place among the great FX comedies as an endearing and hilarious look at the dreams and ambition of ‘Chip Baskets’ and his extended, loving family,” said Eric Schrier, President, FX Entertainment. “This show has been a joy for everyone at FX and we are grateful to Jonathan Krisel, Zach Galifianakis, Louie Anderson, Martha Kelly and the rest of the cast and crew for giving us the gem that is Baskets.”

Season four of Baskets continues Thursdays with the following episodes:

In the three seasons that Baskets has been Emmy Award(R) eligible, Louie Anderson won an Emmy for Outstanding Supporting Actor in a Comedy Series and was nominated two additional times for his work as loving matriarch “Christine Baskets.” In 2017, Zach Galifianakis received an Emmy nomination for “Outstanding Lead Actor in a Comedy Series” for his transformation into twin brothers “Chip Baskets” and “Dale Baskets.”

What do you think? Have you enjoyed the Baskets TV show on FX? Are you sorry to hear that there won’t be a fifth season or, is this the right time to end the series?

I absolutely love Baskets! My husband got me into the series and we’ve watched ever episode. Im sorry that they are ending the series, hopefully FX will change their mind
In a world of reality shows it’s nice to have a good comedy show to watch.

I love this show and I am sad to hear the ratings are so low. I do feel the show has become more serious and I don’t laugh as much as I did in the first 2 seasons, but overall this show is great and I love Christine Baskets! I would definitely keep watching if they renewed the show

I really enjoyed Baskets. I would love to hear that FX changed their decision to cancel the series and keep it on the air for a season 5. I’m 66 and probably not the age group FX wanted to attract, nevertheless, I looked forward to every new episode and wish they were hour-long instead of just 30 minutes. Seems like there was so much more to explore in this comical, yet life-like and unique, TV show. It was fun to watch, sometimes touching, thought provoking and refreshing. I’ll be looking for more projects by Zach Galifianakis.

I love Baskets! I’m so sad it’s ending. It’s my Joy to a stressful day. Or if I’m feeling sad it always makes me happy. Very disappointed

Didn’t even know about this great show until this year. Seems like FX just started promoting it. Hilariously funny, I love Louie Anderson as Christine. Too bad it’s coming to an end.

My family loved Baskets! Never missed an episode! Loved all of the characters. Will definitely miss it! I just do not think enough people knew about the episode!

I’m so upset that Baskets will be ending. I never miss an episode. I look forward to the show every Thursday. My absolute favorite. So sad all that talent is coming to an end

We love everything about it, and look forward to Thursdays for the new one. We are so upset it’s over!!

I’m sad to see the show end, and maybe it can be picked up somehow. I too looked forward to every episode. It was a great ensemble, and Louie Anderson has been a gem as Christine. Is it possible that in the history of television “Martha Removes Her Cast” will be up there with “Who shot J.R.” ?

Let’s hope Netflix or Amazon will pick up this uniquely heartwarming comedy. We need more laughs from Christine Baskets.

This is a great series and I hope the people in charge renew for another season. ONe of the best series on FX.

A very sad thing to hear it will be ending. The laugh out loud humor will be missed. I so looked forward to it when it was on. Which that in itself probably lowered ratings. Too long of breaks between seasons! I’ll miss the entire cast. And I’m not in the desired demographic, I’m 60!

Cancellation of “Baskets” is a travesty! This outstanding comedy in a world that sure could use some humor is a necessity. Louie Anderson is truly a comedic gem and Zach Galifianakis, Jonathan Krisel, Martha Kelly along with the rest of the cast are the funniest thing going on television. Again, the concern for ratings of 18-30 something millenials is to blame. I know they say 18-49, but the truth is kids and young adults are not going to watch ANY program that isn’t a reflection of themselves – because after all: “I am the most important person in the world… Read more »

I absolutely love Baskets. The whole cast create a feeling of realism. I look forward to watching every week. I DVR every episode that comes on including the ones from the other seasons. Like Julie Peterson stated the advertising of the show is almost not existent. It is the only weekly show I watch because like I said I absolutely love it. Please don’t take it off the air. You have a real gem there.

I agree with you wholeheartedly Lisa! It is the only show I care to watch each week!!
I truly hope the network will reconsider as the show just keeps getting better and better!!

I AM EXTREMELY SADDENED TO HEAR BASKETS IS ENDING!! I HAVE LOOKED FORWARD TO WATCHING EACH SEASON WITH MY FAVORITE COMEDIANS!!
TO ME IT HAS BEEN A FUNNY HEARTWARMING SHOW WITH GREAT WRITING AND TALENT!!
PLEASE RECONSIDER AS THERE ARE MANY OF US THAT LOOK FORWARD TO THIS SHOW CONTINUING!
MB THERE IS NOT ENOUGH PROMOTION OF THE SHOW BEFORE IT AIRS..
I FEEL MORE PEOPLE WOULD WATCH IF THEY KNEW IT WAS ON IF LACK OF VIEWERS IS WHAT YOU FEEL THE PROBLEM IS…
PLEASE RECONSIDER!!