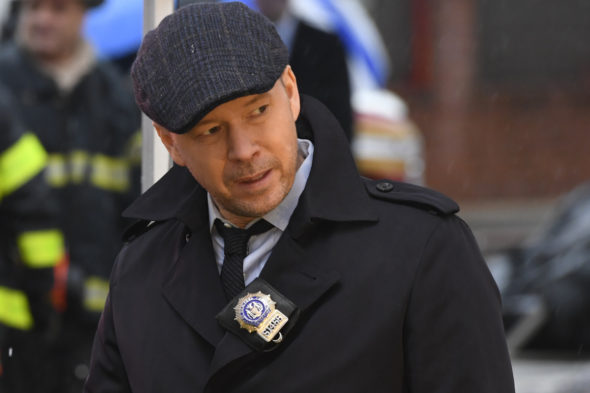 Blue Bloods fans need to mark their calendars. Before season eight launches, fans can see every moment of season seven again. A marathon featuring all of the episodes from season seven will air starting Monday.

WGN America is bringing the series back for a week-long marathon. Find out more about the marathon in the press release below.

Beginning Monday, September 11 at 2:00 pm ET/PT, WGN America celebrates the brave men and women of law enforcement and one of television’s finest dramas with a cable exclusive – a BLUE BLOODS season seven marathon featuring the best installments from the multi-generational cop drama. The exclusive cable home to the perennial fan favorite will air a ‘True Blue Marathon,’ a four-day television event offering viewers the opportunity to catch-up on all the action from season seven, in advance of the season eight broadcast premiere.

Gavin Harvey, President, WGN America, said: ‘Blue Bloods is a family tradition for WGN America viewers. As the exclusive cable home to one of television’s finest dramas, we wanted to give fans a binge worthy catch-up opportunity – one that will give them a chance to immerse themselves in this thoughtful yet entertaining narrative weeks ahead of the show’s season eight broadcast premiere.’

Are you excited for the return of Blue Bloods? Will you watch the season seven marathon on WGN this week? Tell us what you think.

Wish WGN WOULD START WITH SEASON 1 AND RUN ALL IN ORDER THROUGH SEASSON 7.

In case you have not figured it out yet, WGN is NOT showing the complete 7th Season. There are 22 episodes in season 7, WGN is playing 16 episodes. That sucks!

We love this show. It wonderful seeing a loving family even their careers are all stressful.

Best TV show I ever watched. Don’t cancel this show it’s the best

I love Blue Bloods..My favorite cop show ever.. Can’t wait for season 8.. I watch the reruns all the time..

This Tom Selleck led drama is by far and away as good and is better than many of the cable dramas that all the beautiful people rave about. Selleck shows his acting chops like never before. He deserves recognition by the Televison Academy but alas Blue Bloods is not on Netflix or a premium cable channel. Bridget Moynihan is fantastic in her role; that puts her at odds with the rest of the Reagan family. The family dinner scenes are brilliant displaying four generations of Reagans, all expressing their opinions but always tempered with the love of family. Hopefully CBS… Read more »

No doubt , best tv drama ever !

We watch Blue Bloods, all 7 seasons, on CBS All Access. No commercials!
We also get many other old and new CBS shows.

Can’t wait for the marathon to start! Blue Bloods is my favorite detective show. Also Sir Tom Selleck and Donnie Walberg are my favorites as well. Hope the show has lots more success.

Love the show and will be watching. Last of the true cop family shows on air. Am hopeful the new shows mght be half as good.

I am watching WGN repeats as I type this, never get tired of them. It’s nicer to get the newer seasons but I take what I get. Can’t wait for NEW season too. I don’t have On Demand.

NO. I’M TIRED OF REPEATS SHOWN ON MULTIPLE CHANNELS. BLOODS IS ALREADY ON ION SO WHY DO WE NEED IT ON OTHER CHANNELS ESPECIALLY WHEN WE CAN HAVE IT ANYTIME ON DEMAND.