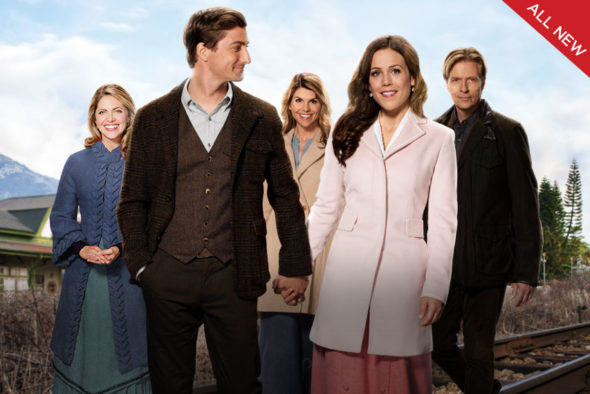 Last year, the When Calls the Heart TV show saw a big rise in the ratings. Will the numbers continue to rise in season four? Will the ratings be high enough for Hallmark to renew the series for a fifth season or, will it be cancelled instead? Stay tuned.

4/24 update: Hallmark has renewed When Calls the Heart for a fifth season.

For comparisons: The third season of When Calls the Heart on Hallmark averaged a 0.24 rating in the 18-49 demographic with 2.06 million viewers.

What do you think? Do you like the When Calls the Heart TV show on Hallmark? Do you think that the series should be cancelled or renewed for season five?

My husband and I throughly enjoy When Calls The
Heart and look forward to the next season.

Thank you Hallmark Channel for renewing When Calls The Heart for Season 5! Have watched since the beginning! Thank you to everyone one involved for bringing us this wonderful show !

So happy that When Calls the Heart will be renewed for a fifth season!! And why not..this is the best series on television bar none and with so many millions of fans who love this show how could it not be renewed once again. Kudos to everyone who was instrumental in continuing this program…this news has made me so happy. Now I just have to wait for months before season five returns!! A television program that has charmed and delighted many fans and hope it continues for many more seasons!!

Have watched it some when it first began, watched the finale on April 23, LOVED it. I need to watch more often!!!!!

Please please pleAse renew it for a season 5!! My 5 yr old daughter even LOVES watching this show!!

Please renew When Calls the Heart for Season 5. It gives us faith in TV that clean family shows that do exist.

When calls the Heart!!! I record it so I can watch it without the commercials! It can’t end without Jack coming back!!!!

When calls the Heart! I record it then watch it without the commercials!

Please give more seasons of WCTH. The story line and characters have kept me glued to Hallmark channel. It is the way television should be clean and engaging. I think people have grown tired of or simply don’t watch other shows due to their blatant use of bad language, violence and sex centric storylines.
I love Hallmark channel.

I along with numerous friends would be devastated if the show canceled.

I have watched since day 1!!! This is a wholesome show! We need these back on tv. Reality shows have taken over! Love love this show and hope it never goes off!!!!❤️❤️

I have falling in love with When Calls the Heart I would be so disappointed if there wasn’t a Season 5. It is nice to be able to watch a show that is wholesome with a great storyline and a love story between Jack and Elizabeth. So you absolutely need a Season 5 (at a minimum). And Constable Jack has to return to Marry Elizabeth.⛪

Please Renew WCTH it is a family show on Sunday nights that all the family can enjoy. It gives us faith in TV that clean shows do still exist.

Please renew WCTH. We love the show. It is very rare to be able to watch this type of shows these days. Hope there will be a fifth season. Love the actors. Great show. Need more shows like this.

Love When Calls the Heart!! Every Sunday my sisters and their families and my parents and I all get together and watch this great series. We can hardly wait a whole week for the next episode. Such a great wholesome series! Love, Love, Love It!!