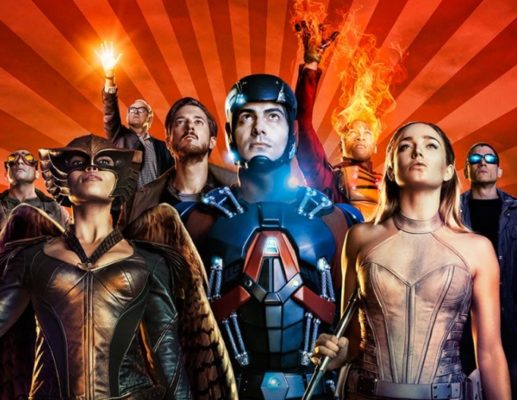 The CW wants to keep this super team together. The network has renewed their DC’s Legends of Tomorrow TV show for a third season. Season three will air as part of the 2017-18 television season.

On DC’s Legends of Tomorrow, the threat of immortal Vandal Savage has passed but there are plenty of new threats to the timeline which could cause devastating changes to history. The Legends clash with foes both past and present, to save the world from a mysterious new threat. Cast members include Victor Garber, Brandon Routh, Arthur Darvill, Wentworth Miller, Dominic Purcell, Caity Lotz, Franz Drameh, Nick Zano, and Maisie Richardson-Sellers.

Season two of the superhero team series is down slightly in the ratings — averaging a 0.70 rating in the 18-49 demographic with 2.015 million viewers. However, it’s the fourth highest-rated series on The CW — below the network’s other DC Comics superhero shows.

The next original episode of season two airs on January 24th.

What do you think? Do you like the DC’s Legends of Tomorrow TV show? Are you glad that it’s been renewed for a third season or, should it have been cancelled instead?

I am so happy that this series is being renewed and wish that some of my other favorite shows either continue and some that have been cancelled would return. I know that it is hard for others to know which ones are a good idea, but I don’t have any problems making those decisions . I only hope that you make the right choices.

i thought the first season was lamely written,i almost gave up on it. i felt it needed some major changes and i was glad to see they did that. i thought it was immensely better than season 1.

This show is awesome! I’m quite surprised it doing so poorly in the ratings.

DC Legends of Tomorrow is excellent and should be picked
definitely!

I love the show….so happy there’s gonna be a third season!

Legend of Tomorrow is second favor show to The Flash. I love the characters. I love the trills and action on the show and its humor. I will like to see Rip Hunter return as being the captain of the ship.

What channel is it on?

I’m very glad that it was renewed!

My fav. show look forward to it every week

Dcs legend of tommorrow is my fav. show, not a cop show not a dr. show or a sitcom. I look forward to this show every tuesday so please dont let me down.

I love DC’s Legends of Tomorrow, and hope that it runs for many years. I’m however not sure why, but I don’t like the Arrow series.