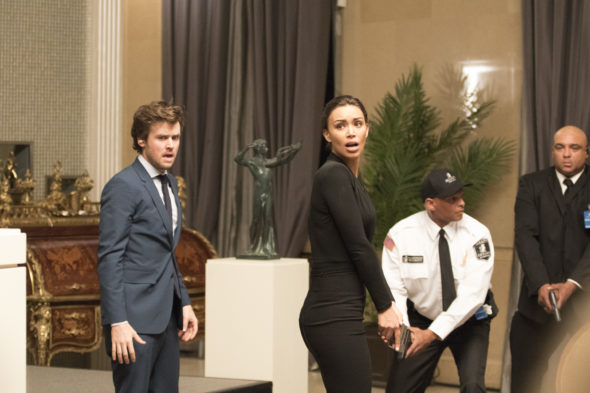 Let’s not fool ourselves. The Deception TV show has been cancelled by ABC after just one season. The mid-season replacement made its debut on March 11, 2018, but even smoke and mirrors couldn’t disguise its lackluster Nielsen ratings performance.

An ABC crime drama from creator Chris Fedak, Deception stars Jack Cutmore-Scott as illusionist Cameron Black, with Ilfenesh Hadera, Lenora Crichlow, Amaury Nolasco, Justin Chon, Laila Robins, and Vinnie Jones. Cameron is rocketing to the top, when scandal derails his show and his twin’s life. Now, this magician uses his tradecraft to help the Feds apprehend some of the most elusive criminals in the world and hopes to prove his brother, Jonathan (Cutmore-Scott), is an innocent man.

Jack Cutmore-Scott is an appealing actor. So far though, it seems he hasn’t found just the right vehicle. This is his second series in as many years not to survive past its freshman outing. Fox cancelled his comedy, Cooper Barrett’s Guide to Surviving Life after just one season in 2016.

Deception: A Look at the Ratings

The first season of Deception is averaging a 0.79 rating in the 18-49 demographic and 3.84 million viewers. Find out how Deception stacks up against other ABC TV shows.

Variety has confirmed the Deception cancellation.

What do you think? Did you enjoy season one of the Deception TV series. Should ABC have cancelled or renewed this TV show for season two?

I really love this show!!! Too many brilliant ideas …Please bring back the season 2

We watched this show together with my fiancé and we just love it. We’re so sad, there’s no season 2. So we hope it’s gonna change one day and will be continued.

I enjoyed the show and was looking forward to the next season.

My husband and I love this show. It’s entertaining, riveting and intelligent. The cast is brilliant and very engaging. We don’t have many shows we watch together and we are VERY disappointed that it is canceled especially with the suspenseful ending of the season. Perhaps the time slot was a poor choice. We had it recorded on our DVR and just finished watching and we are lamenting the fact that is it.

The show is amazing and nice. Please bring back the season 2

This show is really amazing and has all the makings of an all time favorite, plus i think the suspense will literally send me to the hospital and am pretty sure am not alone so please save lives and give us season 2

please bring back deception. it was and still is a really nice tv series . it had all the elements of a real movie and i don’t think it was to be cancelled . Shame unto all those who said deception is bad.

Please bring back Deception, this was a great show it had all of the requirements like intrigue, suspense, mystery, action even romance was there. I enjoyed this show so much that even having to get up at 4am I chose to stay up to watch it. Please reconsider bringing this back.

I don’t think Season 2 should have been canceled. I enjoyed the cast, the scripts, the differences from the typical shows, and I know I had 1 complaint; but since I don’t remember it, it wasn’t worth a cancelation. I would like to know if the Nielson raters differ in TV preferences, regions, etc. not just age; because of some shows that are ranked higher and continue, that I would’ve canceled mid season.

Seems a shame to waste the second season episodes that were already taped by not airing them especially when season one ended with a cliff hanger. The Sunday time slot that Deception originally aired in was bad enough but knowing that the second season is out there and ABC could air it if they wanted is just cruel. Especially now when they know which of this season’s shows aren’t doing well

I really don’t know how this things work but Deception was very great, i loved every bit of it.
I wish some changes could be made. Its a great show and fun was just about to begin