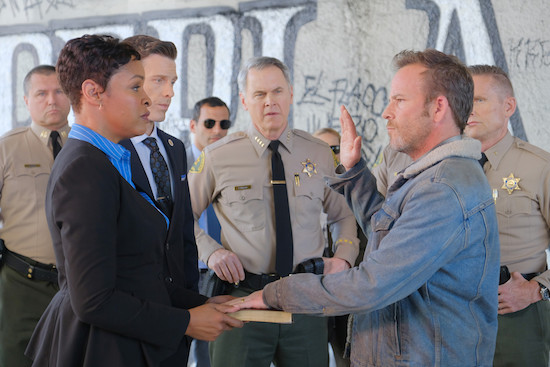 FOX is ready to get dirty next season. The network has ordered Deputy, a gritty police drama, for the upcoming 2019-20 television season. Though the Deputy TV show won’t launch until mid-season (likely early 2020), FOX has released some information and a trailer.

DEPUTY
From writer/executive producer Will Beall (“Aquaman,” “Gangster Squad”) and director/executive producer David Ayer (“Training Day,” “End of Watch”), DEPUTY blends the spirit of a classic Western with a modern-day attitude and emotionally driven, visceral storytelling. Featuring an ensemble of ambitious and complicated human beings who won’t rest until justice is served, DEPUTY brings a gritty authenticity to the modern cop drama.

The Los Angeles County Sheriff’s Department is one of the largest police forces in the world, but when the elected Sheriff dies, an arcane rule in the county charter, forged back in the Wild West, suddenly thrusts the most unlikely man into the job. That man is BILL HOLLISTER (Stephen Dorff, “True Detective,” “Star”). A fifth-generation lawman, Bill is only interested in justice; his soul wears a white hat. The bad guys don’t stand a chance, but neither do the politicos in the Hall of Justice.

The dangers associated with the job often lead the police to LA County General Hospital, where Bill buts heads with Dr. PAULA REYES (Yara Martinez, “Jane the Virgin,” “True Detective”), the hospital’s chief trauma surgeon – and his wife. Given a job he never wanted, in an unfamiliar sea of politics, Bill quickly learns that doing what is expected and doing what is right are two different things, and that his innate, dogged pursuit of justice is the only skill the job truly requires.

What do you think? Do you like the sound of the new Deputy TV show? Do you plan to check out this new FOX series?

I also think deputy is best law enforcement show to come along in a while.they should renew this show for several more seasons and get rid of all the junk like the Swat that is far from the truth. Deputy is close to being as real as it gets with the way politics tries to run the country. Maybe some how you can see keeping up with show would be better for the american people to see. The corruption that goes on these days has really gotten out of control. Working with Law Enforcement I here and see what they… Read more »

I think deputy is best law enforcement show to come along in a while.they should renew this show for several more seasons and get rid of all the junkie comedy shows. Deputy is close to being real as you can get, This is a money making show for fox. Maybe some other station will pick it up. D Waldron, summerfield fl

i WATCHED IT FOR THE FIRST TIME I THOUGHT IT WAS GOOD. ALOT OF ACTION AND I LOVE THE THEME SONG WHATS IT TITLE?

Been trying to find out myself!
My memory turned this up; Switchfoot – ”Love alone is worth the fight” from the album ”fading west”.
It was definitely ”inspired by”, at least.

I shut this off after 5 minutes. TERRIBLE

This show is absolutely great. The actors are excellent and I love it. It has been placed permanently in my TIVO. Love the toothpick and the language, it makes the man. keep the show going.