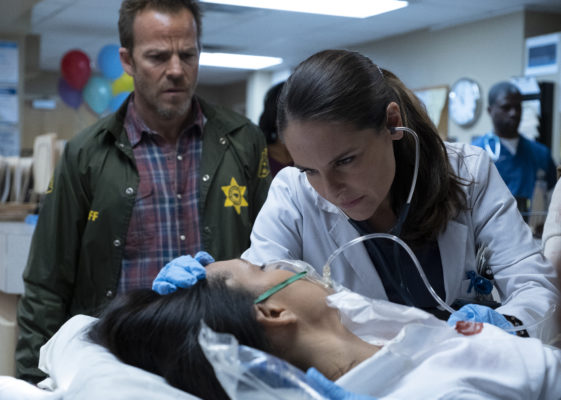 Is Sheriff Hollister up to the job in the first season of the Deputy TV show on FOX? As we all know, the Nielsen ratings typically play a big role in determining whether a TV show like Deputy is cancelled or renewed for season two. Unfortunately, most of us do not live in Nielsen households. Because many viewers feel frustration when their viewing habits and opinions aren’t considered, we invite you to rate all of the first season episodes of Deputy here. *Status update below.

What do you think? Which season one episodes of the Deputy TV series do you rate as wonderful, terrible, or somewhere between? Do you think that Deputy should be cancelled or renewed for a second season on FOX? Don’t forget to vote, and share your thoughts, below.

The series got better as it got going my wife and I both enjoyed it very much. I was really looking forward to wrapping it up at least. Stephen Dorff is a great actor I don’t care what anybody says

Fox generally cancels the good shows. They have no backbone. Run scared all the time. They should take lessons from the cw.

I really enjoyed Deputy and I really like Stephen Dorff he plays a great Character as Hollister , I truly hope it’s not canceled theres very little on TV I enjoy watching and this was one I was looking forward to season 2……

I think this show was great. One of the best in recent years. Very sad if it is taken of the air. The Sheriff is an amazing actor, really really good, I total enjoy this show. Please keep it going.

I would be so so disappointed if Deputy does not come back . Best new Positive series in a longtime. The whole story of an unlikely person getting thrown in to the top position in law enforcement . He is genuine and wants to protect his city and only wants good things for his city. And low and behold he is awesome at the job and gets respect from even the not so happy people were not happy of him coming into position . And I want to see more ! Especially now that he has been re-elected by the… Read more »

Why did they cancel this show? It was one of the best I’ve seen on Fox for or a while

This was by far one of the best shows on TV in a long time. My husband and I both loved every episode. Made us sick that it got cancelled. Nothing really worth watching now.

I am willing to follow this show to say ABC, CBS, NBC, PRIME, NETFLIX even CBS ALL ACESS.

I thought the Search and Rescue was one of the best alone with Paula being held prisoner. I know myself, husband, and sister in law truly loved the series and thought it should of been renewed for another season. Shows like this shows what its like working with the police when there is no racist with the people that you are working with and having a boss that understands and truly cares about his people.

Please bring the “Deputy” back!!@

Maybe CBS all access or Netflix even maybe Hulu might be interested in this GOOD show
sure one of my NEW FAVORITES, heart broken over another good show gets dumped for no good reason