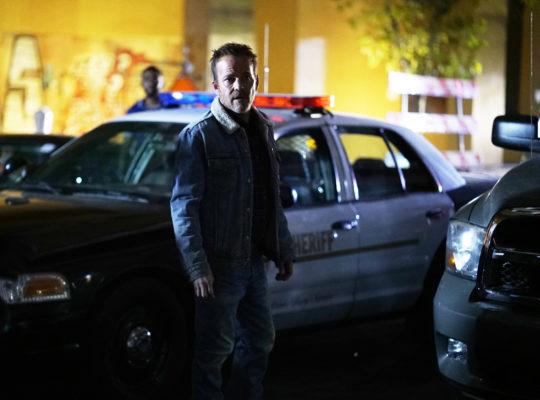 Stephen Dorff is a familiar face to FOX viewers who watched the second season of Star. Now, he’s back on the network in the lead role of new series called Deputy. FOX has had a tough time establishing new drama series. Will this one be any different? Will Deputy be cancelled or renewed for season two? Stay tuned. *Status update below.

A gritty crime drama with the flavor of a classic Western, Deputy was created by Will Beall and stars Dorff, Yara Martinez, Brian Van Holt, Bex Taylor-Klaus, Shane Paul McGhie, and Mark Moses. The show follows an ensemble of ambitious and complicated people who won’t rest until justice is served. The story begins when the elected Sheriff of LA County dies and an arcane rule in the county charter suddenly thrusts the most unlikely man into the job. A true “white hat”, Bill Hollister (Dorff) is a fifth-generation lawman and is only interested in justice. His close team includes Deputy Cade Ward (Van Holt), Deputy Brianna Bishop (Taylor-Klaus), and Deputy Joseph Harris (McGhie). Hollister frequently butts heads with Doctor Paula Reyes (Martinez), chief trauma surgeon of LA County General Hospital and also, Hollister’s wife.

3/20 update: You can see the latest night’s ratings in context.

What do you think? Do you like the Deputy TV series on FOX? Should it be cancelled or renewed for a second season?

Cancelling good shows is why I quit watching any new shows! I just stream all the shows I love! Would rather watch good shows over and over than watch the trash that’s on anymore!!

I can’t believe Deputy was cancelled….This was one of two of the bests show I watched this season. There is so much other junk out there that I rarely watch TV but I really enjoyed this one and was so looking forward to another season. I hope another network picks it up since your network doesn’t want to renew it….totally boggles my mind. I really wish you would reconsider !!!!

I really like this show and I am 58 years old. And finished watching the whole season again for a second time. Please reconsider renewing like NBC DID FOR STUMPTOWN another show that was a hit with the on-line crowd.

We loved Deputy! We want to see it come back. It was a different type of police show and the cast was great. BRING IT BACK!!!!