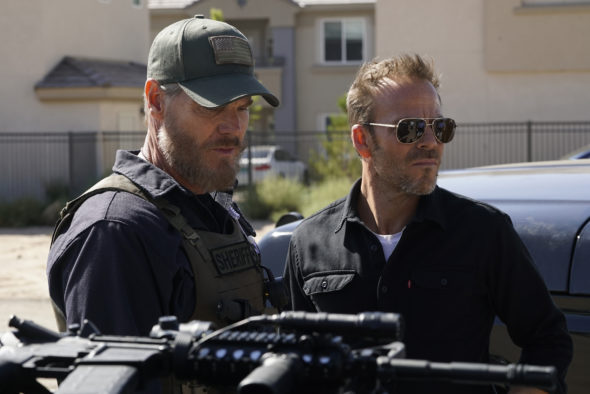 Can the new sheriff in town bring in viewers? Has the Deputy TV show been cancelled or renewed for a second season on FOX? The television vulture is watching all the latest cancellation and renewal news, so this page is the place to track the status of Deputy, season two. Bookmark it, or subscribe for the latest updates. Remember, the television vulture is watching your shows. Are you?

The first season of Deputy averaged a 0.58 rating in the 18-49 demographic and 3.67 million viewers. Find out how Deputy stacks up against other FOX TV shows.

Will FOX cancel or renew Deputy for season two? Thursday night’s a very competitive night in the ratings but FOX needs new dramas. I think this one will be renewed. I’ll update this page with breaking developments. Subscribe for free alerts on Deputy cancellation or renewal news.

4/3/20 update:  FOX has cancelled the Deputy TV series after one season.

What do you think? Were you hoping that the Deputy TV show would be renewed for a second season? Are you sorry that FOX cancelled this TV series, instead?

Please bring the deputy back. It is a good series.

Bring The Deputy back!! It was one of our favorite shows!!

I loved the show Deputy. It wasn’t a frivolous irrelevant show. I’m tired of all the good shows being canceled & then another Reality show being put on. Not everyone enjoys watching these ridiculous Reality shows. It seems like there are more Reality shows than drama shows. It seems that the only way to watch any show of substance is to either subscribe to additional channels through our cable provider which adds more fees to our already outrageously expensive monthly cable bills, or to through Hulu, Netflix, or Prime Video, all of which cost monthly fees & they aren’t live… Read more »

BRING DEPUTY BACK!! I’m pretty sure there are a lot of other people who are as tired of all the phony PHONY programs out there right now!! DEPUTY was DEFINITELY ONE OF MY FAVORITES!! Sooo, how about bringing it back???

I really hate to hear about the cancellation of deputy coz this is a first serie for me to watch three times without getting fond of it. I can’t really tell wat fox thinks

That was a great show please consider bringing it back

I’m sure this was canceled due to it not being trashy enough & not enough sexual related content! Shame, as this was a great show. Just not dirty enough for Hollywood

I think it was a great show! They need to bring it back. They need to give it more time for others to find this hidden gem.

Ugh! I loved this show! It is a huge mistake to cancel it!

Seems like every time a good series comes on it gets cancelled! Fox you blew it on this series! Please rethink it and bring it back!!!

Another disappointment, thanks again.

Figures. Everytime I watch a new show you cancel it. This has to be a mistake. Deputy was great tv.I’f you are listening FOX please being it back

Please bring it back! I enjoyed it so much. This has to be a mistake.

BRING IT BACK! Sometimes i just don’t watch series for fear this will happen.

The show Deputy was one of the best series on tv. Dont know why you cancelled it, but that was not a smart move. Bring it back, Please