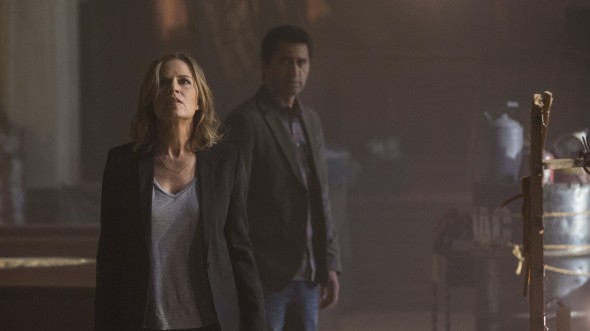 AMC’s highly anticipated sister series to The Walking Dead — Fear the Walking Dead — will premiere on Sunday, August 23rd, with a 90 minute episode. It’s already been renewed for a second season.

Special Episode of “Talking Dead” to Air in the U.S. Following Season Finale on Sunday, October 4 at 10:00 P.M. ET/PT

SAN DIEGO, CA – July 10, 2015 – AMC and AMC Global, the international AMC-branded television network, announced today from Comic-Con International that the worldwide premiere of summer’s most anticipated new series “Fear the Walking Dead” will air Sunday, August 23rd at 9:00 p.m. ET/PT. The extended 90-minute episode will also debut on AMC Global channels around the world simultaneously with the U.S. premiere on AMC and will then re-air in local time zones during primetime.* In addition, AMC announced a special episode of “Talking Dead” following the season finale on Sunday, October 4 at 10:00 p.m. ET/PT (U.S. only). Hosted by Chris Hardwick (Nerdist) and produced by Embassy Row, the live after show will feature special guests and recap the entire first season of “Fear the Walking Dead,” including questions and commentary from viewers.

“Robert Kirkman, Dave Erickson and the fantastic writers, producers, cast and crew responsible for bringing ‘Fear the Walking Dead’ to life have been hard at work creating an entirely distinct and compelling new series,” said Charlie Collier, AMC and SundanceTV president. “We join ‘Fear’ before the rise of the zombie apocalypse with an interesting family dynamic as its entry point. After years of planning, that we are now only six weeks from sharing ‘Fear’ with the world is truly exciting.”

“Anticipation around the world for ‘Fear the Walking Dead’ is reaching a crescendo and we are ecstatic about delivering the series to worldwide fans at the exact same time as the U.S.,” said Bruce Tuchman, President of AMC and Sundance Channel Global. “Whether you’re in Hong Kong, Madrid or São Paulo, AMC viewers will be able to join the journey and experience the start of the zombie apocalypse together.”

Today at 1:00 p.m. PT is AMC’s “Fear the Walking Dead” Comic Con panel event, moderated by Chris Hardwick, and the season one trailer premiere in Hall H. Following the event, the trailer can be viewed in the U.S at www.amc.com and internationally at [http://tiny.cc/CCTUKhttp://tiny.cc/CCTUK. Fans can stop by the Hilton San Diego Gaslamp Quarter Hotel’s Starlight Terrace on Saturday, July 11th from 1:00-2:00 p.m. for a special autograph signing with cast members and executive producers.

A companion series to “The Walking Dead,” the #1 show on U.S. television among adults 18-49, “Fear the Walking Dead” takes us back to the beginning of the zombie apocalypse – a time when the world was changing rapidly for reasons unknown, before anyone understood exactly what was happening, when life as everyone knew it was upended and altered in ways no one could have ever imagined. “Fear the Walking Dead” is executive produced by Robert Kirkman, Gale Anne Hurd, Greg Nicotero, David Alpert and showrunner David Erickson and produced by AMC Studios. The series, set in Los Angeles, stars Kim Dickens as Madison, Cliff Curtis as Travis, Frank Dillane as Nick, Alycia Debnam-Carey as Alicia, Elizabeth Rodriguezas Liza, Ruben Blades as Daniel, Mercedes Mason as Ofelia and Lorenzo James Henrie as Chris.

AMC Global launched in late 2014 and is available in over 125 countries throughout Latin America, Europe, Asia, Africa and the Middle East.

*“Fear the Walking Dead” will launch in the UK shortly following the worldwide premiere. Timing will be announced soon.

Whether commemorating favorite films from every genre and decade, or creating acclaimed original programming, AMC brings to its audience something deeper, something richer, Something More. The network reigns as the only cable network in history ever to win the Emmy® Award for Outstanding Drama Series four years in a row with “Mad Men,” and six of the last seven with current back-to-back honoree, “Breaking Bad.” The network boasts the most-watched drama series in basic cable history and the number one show on television among adults 18-49 for the last three years with “The Walking Dead.” AMC’s current original drama series include “Mad Men,” “The Walking Dead,” “Better Call Saul,” “Hell on Wheels,” “TURN: Washington’s Spies,” “Halt and Catch Fire,” “Humans,” and the forthcoming “Fear the Walking Dead,” “Into the Badlands” and “The Night Manager.” AMC also explores authentic worlds and discussion with original shows like “Talking Dead,” “The Making of The Mob: New York” and “Comic Book Men.” AMC is owned and operated by AMC Networks Inc. and its sister networks include IFC, SundanceTV, BBC America and WE tv. AMC is available across all platforms, including on-air, online, on demand and mobile. AMC: Something More.

AMC Global, a business unit of AMC Networks International, commemorates favourite films from every genre and decade and showcases acclaimed first run original programming to bring audiences something deeper, something richer, Something More. The network has created some of the most award-winning series of the past decade that has re-defined dramatic storytelling. In addition to being widely distributed throughout North America, AMC is available in over 125 countries. AMC Global is a premier entertainment destination that is available in HD and SD and across all platforms, including on-air, online, on demand and mobile.

What do you think? Do you plan to check out Fear the Walking Dead on AMC? Do you think it will also be a big hit?