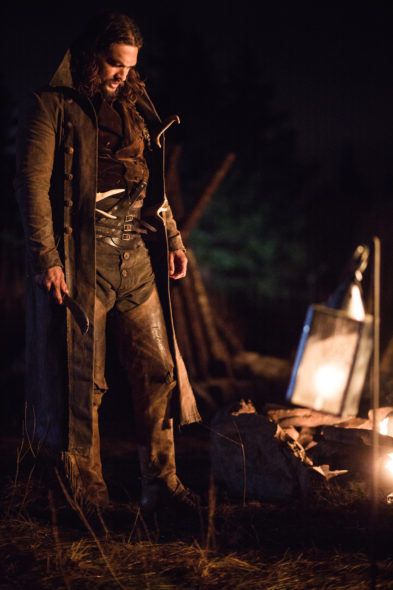 Discovery Canada has renewed Jason Momoa’s Frontier TV show for a second season. The first season of the scripted historical drama premieres in Canada on Sunday, November 6, 2016 at 9:00pm ET. Frontier will stream on Netflix globally, although a drop date has yet to be announced.

TORONTO (October 25, 2016) – Demonstrating unwavering confidence and commitment to its first-ever original scripted drama FRONTIER, Discovery Canada is proud to announce the renewal of the series for a second season. Production of Season 2, once again starring Jason Momoa (GAME OF THRONES, Justice League), is currently underway in advance of the gritty new series’ world premiere on Sunday, Nov. 6 at 9 p.m. ET on Discovery Canada.

Produced in association with Discovery by Take The Shot Productions, together with their partners at ASAP Entertainment, filming of FRONTIER’s six-episode second season is now underway in St. John’s, Nfld., Cape Breton, N.S., Cornwall, U.K., and Ottawa. Season 2 of the premium, beautifully vivid 4K UHD-produced drama is set to premiere in 2017 in Canada on Discovery. Both seasons will be streamed around the world via partner Netflix.

“As we started to see this cinematic, well-cast, and meticulously produced series come to life as we’d dared imagine for Season 1, we knew we’d created a uniquely immersive world and story that begged for expansion to a second season,” said Ken MacDonald, Vice-President and General Manager, Discovery. “Our decision to begin filming another six episodes before the series’ world premiere is a testament to our confidence in FRONTIER’s world-class storytelling.”

“We are thrilled to have the love and support of our partners, Bell Media and Netflix, in bringing Season 2 of FRONTIER to life,” said Executive Producers Jeff Fierson and Brad Peyton, ASAP Entertainment. “We are so proud of the work the incredible cast and crew put in to making Season 1 so special, and aim to make the second season just as strong.”

“It’s an amazing gift to be able to tell the stories of incredibly engaging characters in FRONTIER, all set against such a rich backdrop of Canadian history,” said John Vatcher, Executive Producer and Series Director, Take The Shot Productions.

Set against the stunning, rawness of 1700s Canada, FRONTIER is a thrilling action-filled series revolving around warring factions vying for control of the fur trade in a ruthless game of wealth and power. FRONTIER is co-created by Rob and Peter Blackie, and produced by Take The Shot Productions together with their partners at ASAP Entertainment, in association with Discovery, the exclusive Canadian broadcaster. Netflix is the international partner. Edwina Follows is Executive Producer for Discovery, and Ken MacDonald is Vice-President and General Manager, Discovery. Tracey Pearce is President, Distribution and Pay, Bell Media. Randy Lennox is President, Broadcasting and Content, Bell Media. For Take The Shot Productions, Alex Patrick, John Vatcher, Rob Blackie, Peter Blackie, Allan Hawco, Perry Chafe, and Michael Levine are Executive Producers. For ASAP Entertainment, Brad Peyton and Jeff Fierson are Executive Producers.

What do you think? How do you like the sound of the Frontier TV series? Do you plan to watch the first season when it debuts on Discovery Canada and Netflix?

totally have enjoyed the series would love to see more. Love the Scots!!! well played and enjoy the backdrop beautiful Canada my fathers homeland!!! Please give us more

I loved this show from the beginning. We need more than 6 episodes… love Jason Momoa.

Great show and I too can’t wait to see the second season and hope it is much longer with more episodes. Great stories and the Canadian backdrop is awesome. Thank You

Can’t wait for Season 2. Loved the first season and was surprised there were only 6 episodes.

Cant wait for the second sesson

We love the show Frontier. Waiting for next season

When are you going to have season 3 of the Frontier show back on TV. I love this show, it’s one of the best one we’ve had in a long time. Please renew it. From the moment it starts I don’t miss a second of it. Love the series and characters.

season 1 episode 3, beginning of episode you see a soldiers reflection in a large picture mirror. not possible, wasn’t invented yet

I would like to introduce the Real Live Grandsons of Mr. Grant Carter and Dusty rainycreekranch.com They are Hunters, Trappers and Guides. The underlining passion they have for their trade is almost a reincarnation of their great Grand sires. They are also Cousins of the Great Louis Riel.