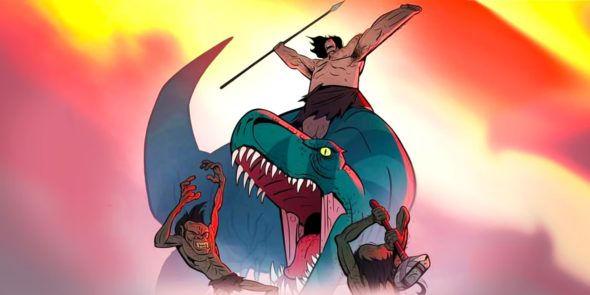 Get ready for another season of Genndy Tartakovsky’s Primal. The second season of the adult animated series is coming to Adult Swim later this month and episodes will be released on HBO Max the next day.  The series revolves around a caveman and his unlikely friendship with a dinosaur. The voice cast includes Aaron LaPlante, Tom Kenny, Jon Olsen, Amanda Troop, and Laëtitia Eïdo.

Adult Swim revealed more about the return of the series in a press release.

Genndy Tartakovsky’s Primal follows the tale of Spear (Aaron LaPlante), a caveman at the dawn of evolution, as he forms an unlikely friendship with Fang, a nearly extinct dinosaur. In the second season, Spear and Fang journey to a new world to rescue Mira (Laëtitia Eïdo) from her captors, only to find a place filled with savage brutality

“Hard core, epic badassery is coming your way!” said Tartakovsky. “Season Two is amped up, and when it drops nothing will ever be the same.”

In addition to resounding praise from critics and fans alike, the first season of Genndy Tartakovsky’s Primal is currently a top 10 most-watched series from the Adult Swim library on HBO Max.

Filled with suspense, heartbreak, excitement, love and fear, all with almost no dialogue, the series is a painting come to life, relying solely on music and graphic imagery to tell the story of two unlikely allies as they navigate through a treacherous world. After bonding over unfortunate tragedies, they seem to become each other’s only hope of survival.

Check out the trailer for Genndy Tartakovsky’s Primal season two below.

What do you think? Are you excited about the return of this Adult Swim animated series?