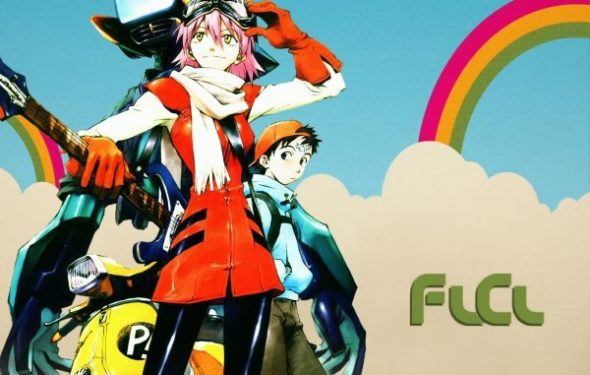 The first new season, titled FLCL: Progressive, will follow “the story of 14-year-old Hidomi, her classmate Ide, and two otherworldly beings, “Jinyu” and “Haruha Raharu,” who are determined to unlock their hidden potential.” The second, called FLCL: Alternative, “centers on the misadventures of 17-year-old Kana, a high school junior who spends her days hanging out with her besties, Mossan, Hijiri, and Pets.”

More than 15 years since its original launch in Japan, Adult Swim and Production IG will premiere two new seasons of one of the most insane anime ever created, FLCL, starting on Saturday, June 2nd at 11:30 p.m. (ET/PT). Debuting on Adult Swim’s popular anime block Toonami, the new seasons bring together members of the original animation team with a whole new generation of creators.

“FLCL has always been a personal favorite of mine, and having the opportunity to work with Production IG on these new seasons has been a dream come true,” said Jason DeMarco, senior vice president/creative director for on-air at Adult Swim.

Up first, FLCL: Progressive tells the story of 14-year-old Hidomi, her classmate Ide, and two otherworldly beings, “Jinyu” and “Haruha Raharu,” who are determined to unlock their hidden potential. Mixed up in this is an all-powerful force known as “ATOMSK,” a gorgeous vintage car… and a certain Vespa Scooter.

Following FLCL: Progressive will be another new season, FLCL: Alternative, which hands the series over to a totally different team of young creators who will redefine the meaning of “sequel.” The series centers on the misadventures of 17-year-old Kana, a high school junior who spends her days hanging out with her besties, Mossan, Hijiri, and Pets. They live unremarkable lives, until the day a Mecha falls out of the sky, along with a strange woman named “Haruko.” Her plans for Kana and her friends involve the force known as “ATOMSK.” Kana will have to risk everything to decide whether or not to help… like she really has a choice!

Returning to reprise her role as the enigmatic “Haruko” is talented voice actress Kari Wahlgren (Rick and Morty, Teen Titans) and both seasons will feature original music from Japanese alternative rock band The Pillows. FLCL: Progressive and Alternative are co-produced by Adult Swim and Production IG.”

What do you think? Are you a fan of FLCL? Will you watch the new seasons?

The original was very good. I’m hoping they can capture the spirit and insanity of it. I’d like it if they would tell a bit more about Medical Mechanica. And the guy with the eyebrows.

I’m tired of anime, but I do like the drawing style…too bad it can only be used for certain types and rarely for anyone else. Tired of looking at the same thing. There is a few animes I wished I had finished just to be done, but they didn’t air them right on the channel I watched and started back up to late for me.